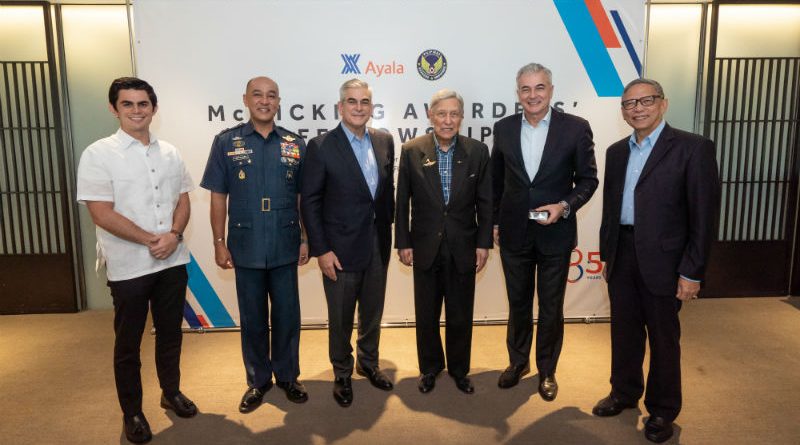 The McMicking Wings Awards was created by Col. Joseph R. McMicking, the visionary who transformed post-war Makati into the country’s premier Central Business District. He was also a decorated World War II pilot, who in 1939 created this distinction to celebrate excellence amongst the best military pilots in the PAF.

“The much-coveted McMicking Wings worn on an awardees’ right breast remains an honor and  a  privilege  to  this  day.  We  are  treated  with  great  respect  because  it  is  a  symbol  of excellence. . . The McMicking Wings motivate students in the military pilot training to excel and give their best in carrying out higher responsibility—always in good moral standing to achieve the mission we seek to accomplish,” said BGen. Adelberto F. Yap (Ret.), Armed Forces of  the  Philippines  (AFP),  who  was  the  last  recipient  to  be  personally  awarded  by  Col. McMicking in 1968.

“The Ayala group has been a strong advocate of initiatives in support of the Armed Forces… We  understand  the  enormous  responsibility  you  carry  in  helping  secure  our  peace  and security,  and  we  truly  appreciate  all  that  you  have  done  for  our  country,”  said  Ayala Corporation Chairman & CEO Jaime Augusto Zobel de Ayala in his welcome address. Zobel is the  grandnephew  of  Col.  McMicking,  who,  he  revealed,  taught  US  President  Dwight  D. Eisenhower how to fly.

Col. McMicking was inducted into the US Air Force from the Philippine Air Force Reserve Corps after the bombing of Pearl Harbor. He accompanied Gen. Douglas MacArthur to Corregidor and  Australia,  and  later  on,  to  Leyte,  with  President  Sergio  Osmeña.  He  was  given  the Distinguished Service Star by the Philippine government, while the US government awarded him the Legion of Merit, the Air Medal, the Bronze Star, Distinguished Unit Badge, Pacific

Theater Ribbon, Philippine Liberation Ribbon and the Philippine Defense Ribbon. He passed away on October 5, 1990 in Sotogrande, Spain.

By  continuing  the  McMicking  Wings  Awards,  Ayala  upholds  the  tradition  started  by  Col. McMicking to pay tribute to the brave men and women of the PAF. It is also a commemorative celebration of Col. McMicking’s legacy and patriotism.