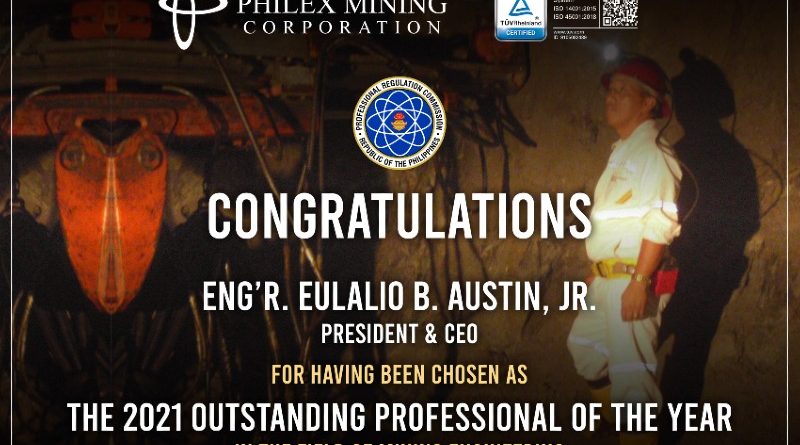 TUBA, Benguet – The president and chief executive officer of the Philex Mining Corporation expressed his gratitude to the Professional Regulations Commission (PRC) for conferring to him the 2021 Outstanding Professional Award for Mining Engineering.

Philex president and chief executive officer Engr. Eulalio B. Austin, Jr. stated that he was privileged and humbled by the award, saying that the same is not for him but for the officials and employees of the mining company who were instrumental in elevating its status in the country’s mining industry.

He disclosed that the award is considered one of the most prestigious awards being conferred to deserving professionals from their different fields of expertise because it was purely done by the PRC through the merits and not through endorsements from influential individuals and groups.

Austin is the first indigenous people (IP) who had been conferred such a prestigious award by the PRC and that he is proud of being the first Igorot to receive the same.

The Philex official pointed out that the award should serve as a motivation and inspiration for IPs to excel in their chosen fields of profession to be able to gain such recognition from the award giving bodies in the future.

He asserted that the awards given to individuals are earned through hardwork, patience and dedication to their jobs and that the same are not demanded nor offered as it is their track records in their work that will speak for what they have done in advancing the state of their chosen profession.

According to him, one of his facets in being able to be adjudged as such is his being loyal to the company where he started as a young professional and was able to climb the ladder of success through persistence and perseverance amidst the challenges imposed by internal and external factors in the discharge of his duties and responsibilities.

Last November 12, 2021, the PRC conferred to Engr. Austin the2021 Outstanding Professional of the Year in the field of Mining Engineering during a virtual awarding ceremony.

Austin was said to have made significant contributions to the development of mining engineering during his active career such having stayed with the Philex Mining Corporation over the past 3 decades having occupied various positions like mine engineer, draw control engineer, mine production superintendent, mine engineering and draw control department manager, engineering group manager and min division manager aside from being the assistant resident manager and vice president for operations before being promoted to senior vice president for operations and eventually the president and chief operating officer. By HENT

This post has already been read 2616 times!LA TRINIDAD, Benguet – The provincial government is studying the possibility of gradually