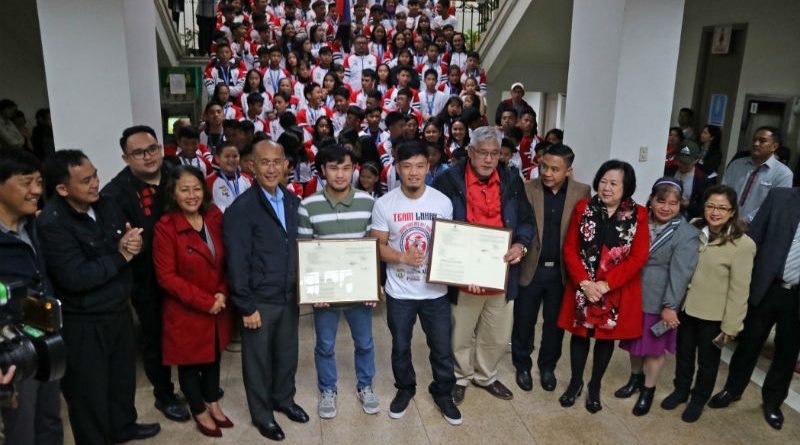 BAGUIO CITY – The recent success of some athletes from the region did not go unnoticed as the local government of Baguio gave them the recognition they rightfully deserved during the flag raising ceremony at the City Hall recently.

Baguio City completed a three-peat championship run in event held in Puerto Prinsesa, Palawan on August 23 to 31  with 61 golds, 45 silvers and 70 bronze medals while competing against 248 other participating local government units from different parts of the country. It is the city’s sixth overall championship since 2011 in the sports event for athletes under 15-years old.

Cash incentives from the City, likewise, await these Batang Pinoy achievers. An athlete gets P10,000 for every gold medal; P5,000 for every silver, and P3,000 for every bronze medal. Coaches receive the same amount per medal of their athlete with a ceiling of P20,000. It is estimated that this year’s medal haul will result around P1.5M shelling out by the city in the form of cash incentives.

On the other hand, the local MMA fighters were recognized for winning their matches in the ONE Warrior Series in Singapore on August 6, 2019.

“Thunder Kid” Adiwang ditched his prospect status and joins ONE Championship as a legitimate regular strawweight campaigner with his win.

Adiwang cooked a masterful unanimous decision victory against Anthony “The Antidote” Do to record his third consecutive ONE Championship win and earned a $100,000 contract that goes along with a spot in the ONE roster.

Isamel Bandiwan finished Muhammad Adib Sulaiman by strikes early in the third round during the same night. Bandiwan hiked his MMA fight record to 6-2 and is also a prime candidate for the incentives earned by Adiwang.

Lastly, Baustista was cited for his participation and top finish in the Crazy 24-Hour Endurance Run at Intramuros, Manila on September 1, 2019. He crossed the tape as first runner up in the run.