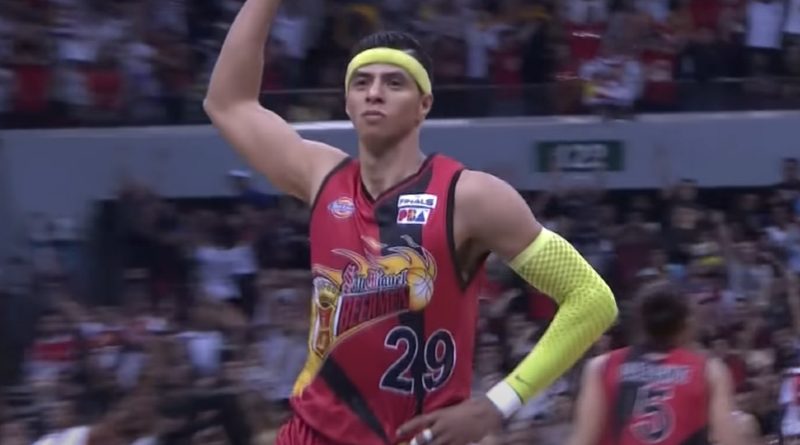 Santos aced the three-round contest, the first to ever record a 100% winning percentage in the show’s segment that started on October 29, 2019.

The 2013 PBA MVP was on the show to “judge” some personal circumstances of seven comedians, Boobay, Boobsie, Big Mouth, AJ Tamiza, Orca, Dandan, and George, by picking out the right persons who fit the description.

The comedians recently became out of work with the closure of their comedy bar employer Klowns and Zirkoh, incidentally owned by Eat Bulaga con-host Allan K.

This task is seemingly common as it looks at first glance. The difficulty of this achievement, however, will surprise many when looking at the probability of getting it done.

The rules of the first round required Santos to chose the four comedians who won an entertainment award. In mathematical perspective, Santos has a probability of 2.86% or 1/35 of getting all four correct answers.

Santos initially picked out Boobay, Dandan, Boobsie, and Orca from the group, replaced Boobsie with AJ, then quickly reversed it upon observing Vic Sotto’s reaction, who kept on doing silly movements from time to time.

Clean sweep! That leaves the pot money amounting to P50,000, which he and his home partner will take home after the contest, still intact.

Incidentally, host Paolo Ballesteros, one of the show’s hosts, revealed he was a schoolmate of Boobay at Saint Louis University (SLU), Baguio, a relevant information that would aid Santos in a later round.

The second round had him guessing who among the comedians had a relationship with a foreigner. Three of them did. The probability Santos gets the correct combination gets lower at .071% or 1/140.

Santos initially send Big Mouth, Boobsie, and Boobay to their respective cubicles but quickly replaced Boobay with Orca upon observing Sotto while immediately explaining foreigners would probably love her ability to sing.

When Orca, the last correct person, was about to be interviewed, Santos confirmed surety of his choice because he said he was alert to observe “Bossing” Vic scratch his neck, an act host Jose Manalo described as a “play” dissected by Santos.

The last round had him guessing who among the seven had finished their college education. The probability of him getting both correct answers is now at .024% or 1/420.

“Bossing” did scratch different parts of his body and Santos quickly replaced George with Boobay but explained that he remembered Boobay’s story in the first round.

Bingo! Both again hit the bull’s eye. Dandan confirmed she was a graduate of Bachelor of Science in Industrial Psychology at Polytechnic University of the Philippines while Boobay finished his AB Communications degree at SLU.

As a result, the decorated Beerman and his “Tsismosang Kapitbahay” homepartner, identified by the hosts as Princess Ann Magno, a tattoo artist from Pasig City, split the segment’s top prize.

Santos’ athlete’s mentality was on point in this competitive event. He was clearly engaged in the contest, supported his choices with logical observations and stories revealed during their interviews, and showed some pump fists, celebratory dance or jumps when the right choices were revealed.

He set the tone right from the start by saying with a chuckle “Judgmental po ako, pati po mga hayop jina-judge ko.” when asked by host Vic Sotto about his condition in making his guesses.

He also got in the flow with the show’s comedic gamesmanship as Ballesteros, Manalo and Sotto mixed praises and teases to the two-time PBA All-Star MVP.

Sotto gamely said Santos got an “and-1” after it was revealed his Round 1 picks are all correct but jokingly predicted he will have “3 fouls” at the start of Round 2.

The San Miguel Beerman opened the segment by belting out a short karaoke rendition of Aegis’ “Pagsubok.”