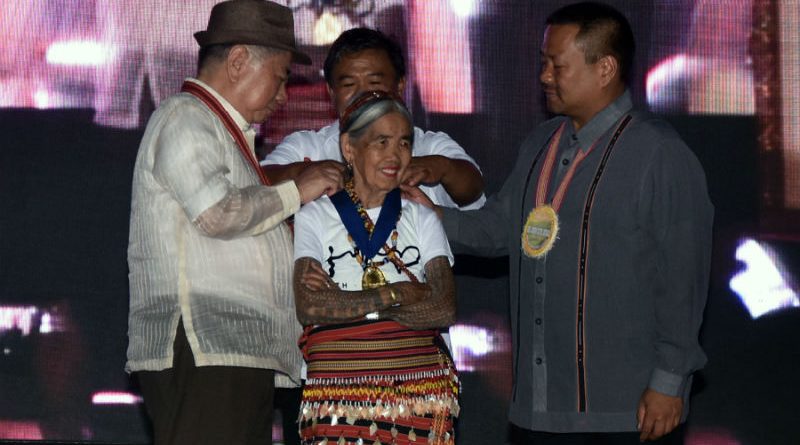 The Dangal ng Haraya Award is given to Filipino artists, cultural workers and historians, artistic or cultural groups, historical societies, institutions, foundations, and councils in recognition of their outstanding achievements in relevant fields that have made an impact and significant contribution to Philippine culture and arts.

Known all over the world as the last of the traditional tattoo artists or mambabatoks of Kalinga, Whang-Od received the Dangal ng Haraya award in the field of Intangible Cultural Heritage.

“Apo Whang Od has long been recognized and respected in her community as a master tattooist. Her practice started in her early adolescence and has since tattooed elders, women, and warriors from her community in the traditional Kalinga practice – using charcoal as ink and calamansi thorns to puncture the skin,” reads the press release from the NCCA last month.

In a resolution, the NCCA recognized Whang od ‘as a living vessel of a traditional practice, who deserves honor and acknowledgment for her contributions, particularly by bringing to greater attention the indigenous practice of tattooing and Filipino culture in general’.

Governor Jocel Baac, in a statement, said he is grateful to the tattoo artist for always bringing honor to Kalinga and reiterated his full support for her and her work.

Whang-od is also nominated for the Gawad sa Manlilikha ng Bayan (Gamaba) or the National Living Treasures Award by the Senate.

In the resolution adopted by the Senate in February, it states that “the continuity of the batek is anchored on the well-being of Whang-od being the last living mambabatok, which necessitates immediate action to preserve the folk art considering Whang-Od’s advanced age.”

“The batek survived centuries of foreign influences. The traditional Filipino tattoo art must not disappear and turn extinct due to mere negligence to preserve a significant feature of Philippine culture and identity,” the resolution reads.

Whang-od rose to global fame a few years ago after being featured by tattoo anthropologist Lars Krutak in a documentary. She has since captured the attention of the international community with features in the New York Times and the BBC. The village of Buscalan in Tinglayan where she lives is now a top tourist destination, drawing hordes of tourists willing to make the pilgrimage to be inked by the tattoo artist.