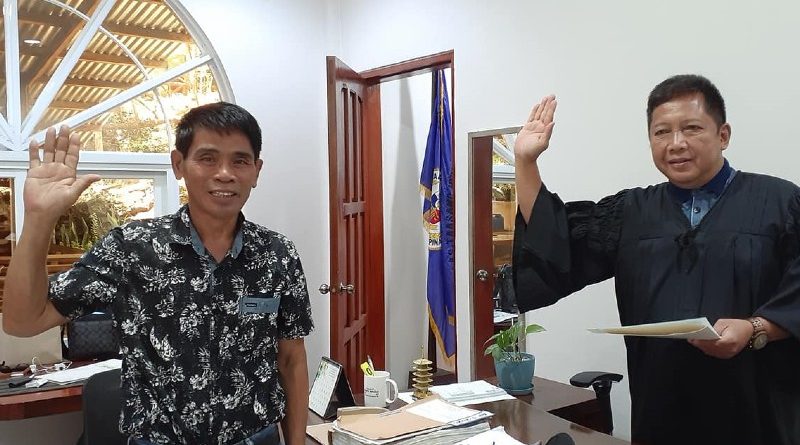 As restrained to go to central office of the National Irrigation Administration due to COVID-19 crisis,  Vice Governor Albano opted to take his oath before Judge Cumigad for him to formally and fully perform his duties and functions as the new president.

Albano, a long time Secretary of NCIA, expressed his utmost gratitude to all members and stakeholders who believe in his capacity to put the association into recognizable heights. He vowed to bring identifiable changes to the organization specifically in bringing the needed services to its members.

“As the new president, we shall plan together and devise methods how to reach out to our members and effectively deliver the services they deserve so that they will indeed feel the essence NCIA’s existence,” Albano underscored.

Many from the IA members were pleased after Albano took the presidency of NCIA. They have high hopes that they shall see evident considerable changes in the management of the organization. “Agyamanak unay ti adu ta sika ti napili nga president ti irrigators association sir VG. Suerte kami ta naggapu kayo iti kameng t IA tayo ket mamatiak ken ammok nga adu ti maaramidan yo nga pagsayaatan mi ken haan dakami nga baybay-an ken kaya yo nga ipaglaban ken maprotektaan dagiti karapatan dagiti kas kadakami nga babassit ken nakurapay nga partner yo nga mannalon sir (I’m thankful that you are the new president of IA. We are fortunate because you came from us and I believe you can do much and that you won’t leave us, rather, you will fight and protect the rights of lowly and poor partner-farmers ),” Merly Beringuel said in her FB post congratulating Albano.

After the election and speaking before about 83 members and officers of the association, Albano initially requested the submission of programs, plans and activities (PPAs) of all regional confederation irrigators association in time for the upcoming inaugural meeting in the 3rd week of June 2021.

Meanwhile, the Board of Trustees of NCIA are: Guillermo Mangalus of Region 3; Arnesto Dinio of Region 4A; Patricio Laberez, Jr. of Region 4B; Daniel Estrella of Region 5; Rolando Pinuela of Region 6; Alonto Marcaban of Region 9; Dante Cudal of Region 12; Romy Lasco of Region 13 and Nemesio Yadao of MARIIS.

The NCIA was established in October 1997 mainly to assist and/or represent the farmers or irrigation-users. That through the association’s officers, the issues and concerns from the members shall be given due attentions and immediate actions which shall be forwarded to concerned offices.

Albano became its first Association’s Secretary from 1997 to 2001 then reelected again in 2014 and 2017 until he was elected to the highest position of the organization this early this month.