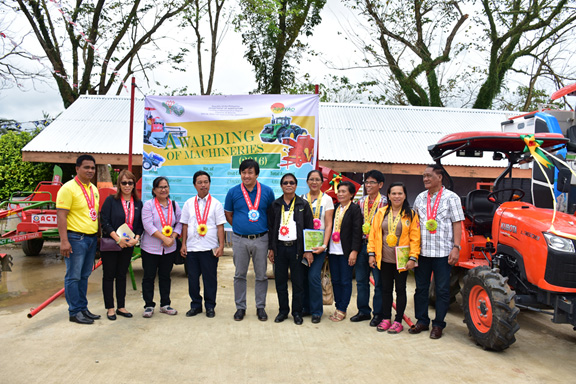 One of the highlights in celebrating Apayao’s 23rd Founding Anniversary is the distribution of 18 hand tractors, 17 multipurpose threshers, two four-wheeled drive tractors and two combine harvesters with an estimated total cost of P12.6M to qualified beneficiaries coming from the seven municipalities of Apayao.

It can be recalled that Secretary Emmanuel Piñol visited Apayao in 2016 and first introduced the program which is in consonance with President Rodrigo R. Duterte’s thrust to increase food production and alleviate poverty. Apayao is the only province in Northern Luzon that is recipient of the program being          included in the 10 poorest provinces in the country.

The SAAD program which is funded by the National Government aims to compliment the Pantawid Pamilyang Pilipino Program (4Ps) initiated under the Department of Social Welfare and Development (DSWD). Also, it provides livelihood opportunities which will benefit individual community members, families or group participants in the province.

Meanwhile last year, Provincial Agriculturist Prudencio Bosing together with the Regional Corn Coordinator Gerardo Banawa led the turn-over of another sets of agricultural farm machineries under corn and rice programs at the Department of Agriculture – Research Outreach Station in Luna, Apayao.

In the poverty alleviation program of the province as one of the main thrusts of Governor Elias C. Bulut, Jr., the needs of the farmers are being considered and addressed upon. The SAAD program will further initiate faster and actual resolution with regard to the agricultural concerns of Iapayao farmers.