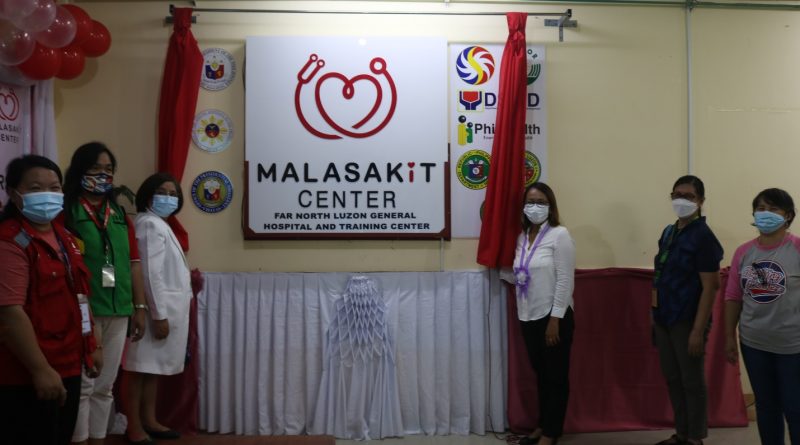 Disadvantaged and indigent residents of Apayao and nearby municipalities of Cagayan now need not worry much about their medical and hospitalization expenses with the formal launching on September 4 of the Malasakit Center, the 81st in the country, at the Far North Luzon General Hospital and Training Center (FNLGHTC) located at Quirino, Luna, Apayao.

Malasakit Center is a one-stop service center of government services instituted for the purpose of expediting processes in availing of services relevant to health care, primarily for, but not limited to, financial assistance. It is an inter-agency synergy to facilitate speedy processes of availing government’s assistance due to the presence of PhilHealth, Philippine Charity Sweepstakes Office, Department of Health, and the Department of Social Welfare and Development within the hospital premises.

In his message, Senator Go acknowledged the invaluable support of the provincial leadership of Apayao for the opportunity given to him to serve the people in his capacity as a senator. He added that the Malasakit Center is one of his priority programs that would directly benefit the masses.

He stressed that the services the center offers should be made available to everyone. “As long as you are a Filipino, you are qualified to be assisted. Sa mga kababayan nating hindi tutulungan ng Malasakit Center, ipaalala niyo na Pilipino kayo at pagmamay-ari niyo rin ang nasabing center (To those who will not be helped by the Malasakit Center, remind them that you are a Filipino and you own also the center),” the Senator said.

According to the Senator, a one-time additional P10 million was given to FNLGHTC’s Medical Assistance for Indigent Patients (MAIP) thru DOH, on top of the replenishable monthly fund of P3 million provided from the Office of the President Socio-Civic Projects Fund for the operations of the center.

In behalf of Apayao, Governor Leah expressed gratitude to President Rodrigo Duterte for expanding nationwide the concept of the Malasakit Center which is now being enjoyed by many. She also thanked Senator Go for working out the establishment of the center.

“Indeed the Province of Apayao is very fortunate because we are among the first provinces of the Cordillera Administrative Region to be given a Malasakit Center, so maraming salamat kay Presidente at Senador Bong Go,” Gov. Leah said. She urged the different agencies comprising the center to “give your best in order to save lives and foster a healthy and empowered yApayao citizenry”.

Meanwhile, Congressman Bulut, Jr., in a message read by Ms. Marinel Ginez, extended his appreciation to Senator Go stating that the impoverished patients both of the Provinces of Apayao and Cagayan shall benefit from the program.

“With the COVID-19 pandemic affecting every one of us, this project gives us something to cheer about, to be hopeful that illness and hospitalization will not burden us,” Cong. Butzy said.

For her part, Dr. Lubo expressed also her deepest gratitude to Senator Go saying that the Malasakit Center is a “manifestation of God’s grace, and that it is indeed a dream came true.”

Establishment of Malasakit Centers in national government hospital as well as LGU-operated ones is mandated under the Malasakit Center Act, a pet Bill of Senator Go which was signed into law by President Duterte on December 2, 2019.

The establishment of Malasakit Center in the FNLGHTC and a helpdesk in Conner District Hospital was jointly requested by Gov. Leah and Cong. Butzy (then Congressman and Governor respectively) during the guesting of Malasakit Center prime mover Senator Go during the opening of the Cordillera Administrative Regional Athletic Association (CARAA) Meet 2019 that Apayao hosted. BY GERRIAHZON S. SEBASTIAN

PHOTP CAPTION: TUNAY NA MALASAKIT. Apayao Governor Eleanor C. Bulut-Begtang and Far North Luzon General Hospital and Training Center Medical Chief Dr. Marlene Libatique-Lubo (3rd and 4th from right, respectively) along with the representatives of partner agencies PCSO, DWSD, DOH and PhilHealth lead the unveiling of the Malasakit Marker during the launching of the 81st Malasakit Center of the Philippines at FNLGHTC located at Quirino, Luna, Apayao on September 4. BY GERRIAHZON S. SEBASTIAN

This post has already been read 475 times!  Former Sen. Ferdinand ‘Bongbong’ Marcos, Jr. on Monday asked the government to