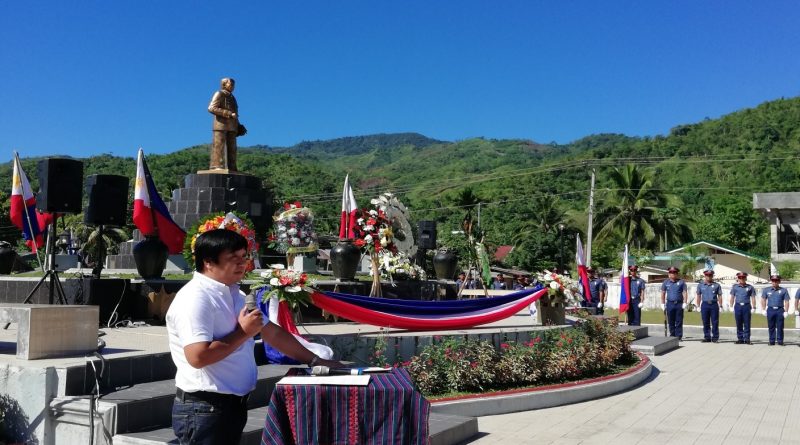 CALANASAN, Apayao – Governor Elias C. Bulut, Jr. applauded the efforts of Apayao Philippine National Police headed by PSSUPT. Dominador Halog, Jr. along with all those who worked hard in organizing the wreath-laying ceremony in reverence of his late father, the founding father of the Province Apayao during the celebration of the 2018 Apayao Founder’s Day on May 18 in time with the latter’s birth day.

Provincial and municipal officials together with the heads of different national line agencies stationed in the province trekked the verdant mountains of Calanasan just to pay honor to a provincial hero, the late Hon. Elias K. Bulut, Sr. (EKB).

Bulut in his short message, expressed his gratitude to all who came to visit the place where a human statue of EKB has been erected and offered flowers with gun salute from the PNP.

He also acknowledged the presence of Atty. Revsee Escobedo, Assistant Secretary for Procurement Service and Project Management Service of the Department of Education who was the guest of honor for the regional kick-off for the Brigada Eskwela ’18 at Luna, Apayao on May 17.

Bulut recognized the need for a continuing oneness not only of the officials but of all the people of Apayao. “Without unity, love of peace, there would be no progress in our community. This is the advocacy of our hero,” he stressed.

In addition to the peace-loving characteristic of Iapayaos, he manifested the need for the people of knowing and putting Christ in the center of one’s life. “Besides being peace-loving people, we should adopt a Christ-centered life and be a person to others,” he pointed out.

The people of Apayao celebrate the Apayao Founder’s Day to reminisce with joy the invaluable contributions of EKB who made possible the separation of then one province of Kalinga-Apayao. The celebration is pursuant to a Provincial Ordinance enacted on 2017 by the Sangguniang Panlalawigan of Apayao.