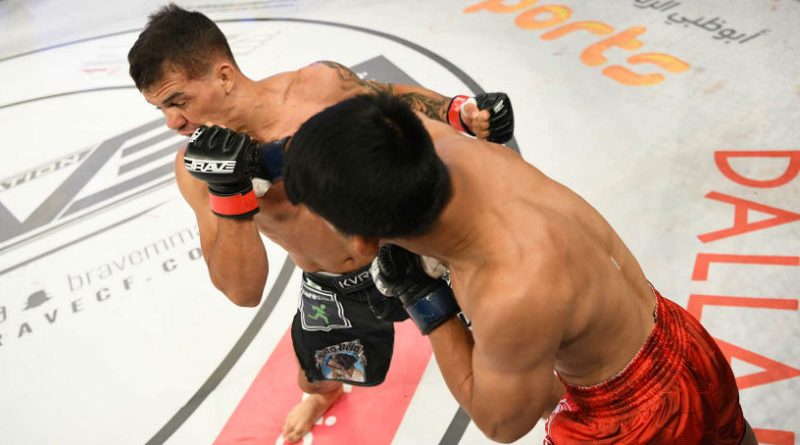 While the Team Lakay tandem of Joshua Pacio and Lito Adiwang enamored Cordillera fight fans with their potential long-term stronghold of the strawweight division of ONE Championship, Jeremy Pacatiw is showing a steady climb in another promotion and form another Team Lakay monopoly.

He may soon end up among the crowd of top contenders in the bantamweight division of Brave Combat Federation where his teammate, Stephen Loman, reigns supreme.

“The Juggernaut”, who is only 23, took out title contender Felipe Efrain with a first round technical knockout during Brave CF 33 at the Prince Abdullah Al Faisal Stadium Sports Hall in Jeddah, Saudi Arabia last December 27, 2019 and erased the stigma of his controversial loss earlier in November to end the year.

Pacatiw engaged his Brazilian knockout artist foe in a stand-up game as both men came out roaring and traded heavy leather upon the sound of the bell.

Both combatants were exchanging blows when Pacatiw connected a right that send his shaky opponent to the mat.

Pacatiw then rained the ground and pound until the referee has seen enough and end the fight at the 1:10 mark of the first round.

The win was Pacatiw’s fourth victory in his last five bouts. It was his 7th win against four losses overall as a professional.

Pacatiw should have been riding a five bout winning streak had the judges in his bout against Ali Al Qaisi not awarded a unanimous decision win to the Jordanian that halted the Igorot fighter’s three consecutive winning streak then. Many fight analysts, including Team Lakay Head Coach Mark Sangiao, saw Pacatiw winning the fight.

His other three recent wins include an armbar submission victory against Mark Alcoba last March, a unanimous decision win over Uloomi Karim on October 2018, and a split decision win over Keith Lee on August 2018.

The win was also Pacatiw’s sixth victory in the Bahrain-based MMA promotion in ten appearances. His ten fights are the most ever by any fighter in Brave, two more than current Welterweight World Champion Jarrah Al-Selawe, who has 8 bouts for the organization. The six victories is the second most, next only to the seven wins of Al-Selawe, known as the “Jordanian Lion”.

The Efrain bout was fought at a catchweight of 64 kilograms. The Brave bantamweight category has a weight limit of 135 pounds or equivalent to 61.2 kilograms.

The Kapangan, Benguet native’s rise in the Loman ruled division gives Team Lakay another tandem that possibly could establish supremacy for a long time.

Loman, who has just turned 28, is still about to reach his prime and is going nowhere anytime soon as he already announced his intention to extend his reign in the division. His grip on the bantamweight title already gave him the longest reigning champion in any weight division title ever in Brave.

He was just ranked number one among 146 active Pro Middle East Bantamweights and 2nd among 216 active Asia Southeast Pro Bantamweights.

Efrain was one of the challengers of Loman for the Brave belt last year and gave reigning Bantamweight champion the hardest fight during his defenses of the titles, almost submitting him at BRAVE CF 18.

He, however, ended up suffering a technical knockout loss as “The Sniper” turned tables on him during their match.

Meanwhile, another Team Lakay fighter, Harold Banario, suffered a first round stoppage to Russia’s Gamzat Magomedov of Russia in a bantamweight bout.

The loss dropped Banario’s fight record to 5-2 while Magomedov climbed to 5-1.

Another Filipino seeing action that night, Rolando Dy, was also stopped by Anzor Abdulkhozaev in the first round during their featherweight bout.

Dy saw his career record dropped to 12-9 after the loss while Abdulkhozaev’s now stands at an impressive 10-1.