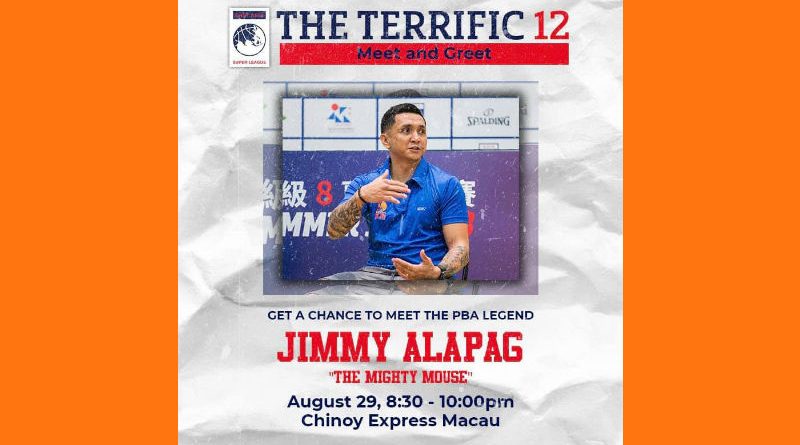 Retired PBA superstar and current San Miguel Beer assistant coach Jimmy Alapag relishes the chance for PBA teams and other ball clubs in the region to have a chance to test their mettles against each other as he makes another appearance in the Terrific 12 tournament.

“The [East] Asia [Super] League is just a great melting pot for the top teams in Asia to get together and compete…The [East] Asia [Super]League provides that platform for teams to showcase the talent they have in these respective countries and an opportunity to play against the best.”, he said.

In addition to its desire to increase the level of club basketball competition and developing players, the East Asia Super League also stated that it is also committed to helping the game of basketball flourish in the region by training coaches and giving them a quality environment in which to hone their core skills.

The “Mighty Mouse” is returning to the Macao-based tournament by tagging along with the Beermen, who will be making their East Asia Super League debut. The Beermen have assembled their starting rosters and are on a mission to take home The Terrific 12 crown as they look to pick up momentum in preparation of their chase to pocket their second grand slam in the PBA.

Alapag was a presenter at East Asia Super League’s Summer Super 8 Coaches’ Clinic last year, where he shared his knowledge to over 55 coaches from all around the world including, China, Chinese Taipei, Hong Kong SAR, Japan, Macao SAR, the Maldives, South Korea, and the Philippines.

Alapag will also host a meet and greet session with massive amounts of Filipino fans in attendance just like what he has done in last year’s edition.

While Alapag is more popular as one of the most legendary figures in Filipino basketball history, his coaching career is also gaining notoriety as of late.

As a player, he won six championships, two gold medals, an MVP award, became part of the Gilas team that advanced to the World Cup in Spain last 2014, holds the most three pointers made in PBA history with 1,250 thre pointers, and has been named an All-Star 11 times across a 14-year playing career.

He isn’t too shabby as a coach either. Aside from his current PBA Commissioner’s Cup championship as an assistant coach of San Miguel Beer, he had led Alab Pilipinas to three playoffs appearances in the ASEAN Basketball League finals appearance in three years of coaching, winning one championship in 2018 with Bobby Ray Parks as the led local player and Justin Brownlee and Renaldo Balkman as their imports.

He was also a recent assistant coach attendee of Sacramento Kings during their participation in the NBA 2019 Summer League.