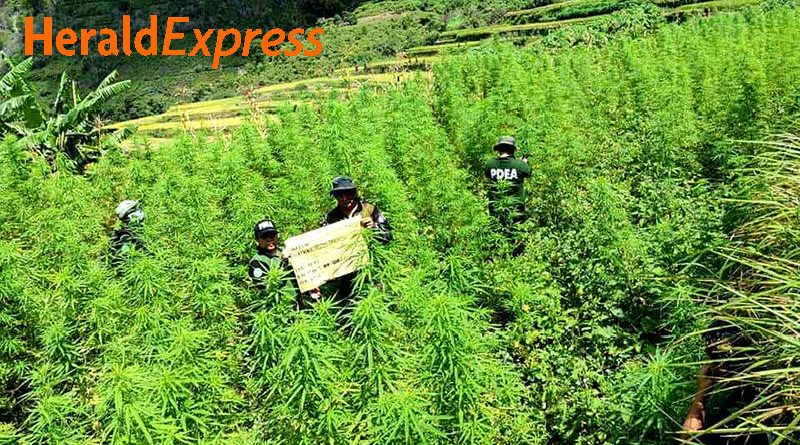 Police Beat
March 26, 2021March 26, 2021 PROCOR Press Release
Over 2.7M worth of fully-grown marijuana plants, seedlings, and dried marijuana stalks were cleared off from three plantation sites in the town of Kibungan, Benguet on March 22-24, 2021.
Anti-illegal drug operatives of PDEA and Benguet PPO destroyed marijuana amounting to Php2,716,000.00 which were discovered within communal forest of Tacadang, Kibungan, Benguet.
Reports by Benguet Police revealed that on March 22, 2021, operatives discovered the first plantation site in Sitio Lengey, Tacadang, Kibungan, where about 4,200 fully grown marijuana plants worth Php840,000.00  were found cultivated in a 700-square meter lot. Also, about 5 kilograms of dried Marijuana Stalks amounting to PhP600,000.00 were found in the area.
Likewise, on the second day of operations, about six kilogram dried marijuana stalks worth PhP720,000.00 along with  180 pieces of fully grown marijuana plants worth Php36,000.00  were found in a 30-square meter lot.
Other plantation sites were raided in the same barangay on the third day of eradication operations. Operatives burned on-site 2,400 fully-grown marijuana plants worth Php480, 000.00 which were cultivated in a 400 square meter. About 1,000 pcs of marijuana seedlings with estimated worth of Php 40,000.00 were found planted in a two-square meter small lot.
Moreover, reports from the PDEA CAR show that the Barangay Chairman of Tacadang is set to be summoned to explain the persistent drug reports in his barangay. (PROCOR RPIO)
Comments