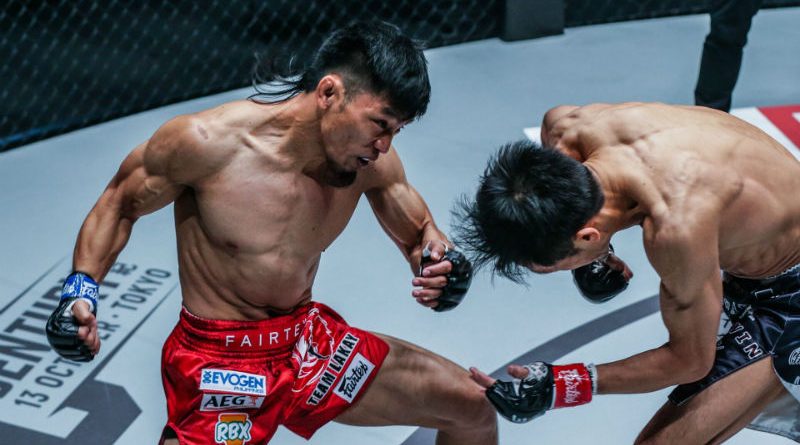 Lito Adiwang kicked off his ONE Championship career with an explosion by retiring Senzo Ikeda with a first round finish in their strawweight bout during ONE: Century held last October 13, 2019 in Tokyo, Japan.

The “Thunder Kid” worked early to take the action to the ground and took control of his opponent in the scramble. Adiwang managed to lock up Ikeda’s head in a scarf-hold position in preparation for a submission.

He, however, failed to get Ikeda to tap and would loss the superior position as both men struggled to get back on their feet. It is when the referee was forced to stop the fight as Ikada hurt his arm in the process. The official time of the stoppage happened at the 1:57 of the first round.

It was such a rousing debut by Adiwang as he was all fired up in facing the Japanese in his hometown and the explosive performance served notice to the rest of the division that there is a new kid in town who can give them a tough competition.

In an interview with ONE championship, Adiwang expressed satisfaction in his performance as he was able deliver and he credited teammate Danny Kingad, who previously met Ikeda at ONE: A NEW ERA back in March as part of the ONE Flyweight World Grand Prix quarterfinals, for helping him prepare for the fight.

He also said while he have his eyes on the division’s throne, he will not entertain the thought of facing the current World Champion, another training partner, Joshua “The Passion” Pacio, because the brotherhood shared between the members of Team Lakay makes the thought of competing against each other a difficult proposition to imagine.

Adiwang said he is happy to wait for his chance while his friend is occupying the top spot.

Adiwang improved his MMA record to 10-2, with six stoppages and three submissions, with the win. The “Thunder Kid” is currently on a six-bout winning streak.

Meanwhile, the other Filipinos participating in the event all got waylaid. Kevin Belingon, Brandon Vera, and Kingad saw their championship aspirations vanished in thin air during their bouts while Honorio Banario couldn’t keep up with a hometown legend as all four succumbed to their also highly-regarded opponents.

Bibiano “The Flash” Fernandes finally laid to rest the debate on who’s got the better between him and Kevin “The Silencer” Belingon in their rivalry by pocketing their fourth bout via a rear-naked choke submission at 2:16 of round two of their championship bout.

The win allowed Fernandes to retain the ONE Bantamweight World Championship.

Belingon’s record fell to 20-7. He has a total now of four submission losses, two of them by Fernandes. Fernades improved his to 24-2, nine of his wins came from submissions.

Brandon “The Truth” Vera failed in his attempt to wrest the Light Heavyweight World Championship from Aung La N Sang after he surrendered a TKO loss to the “The Burmese Python” at 3:23 of Round Two in their bout.

The two protagonists engaged in a highly entertaining, old style stand up striking match, highlighted by an exchange of spinning elbows towards the end of the bout. Eventually, a bleeding Aung La subdued Vera to the mat with heavy fists to end the fight.

Vera, whose ONE World Heavyweight title wasn’t at stake this night, saw his record dropped to 16-8.  Five of those losses came via stoppages.

“The King” was no match for former UFC flyweight king Demetrious Johnson as the “Mighty Mouse” rolled over Kingad during the Flyweight World Grand Prix Championship Final.

Kingad could not find an antidote for Johnson’s speed and experience this night and got his  six-bout winning run snapped.

The loss was the second in Kingad’s career against 13 wins. He, however, should still be able to cling to his high ranking in the division as his other loss was to Adriano Moraes, the title holder and Johnson’s next opponent. Johnson hiked his record to 30-3.

Lastly, Honorio “The Rock” Banario succumbed to a d’arce choke  against Shinya “Tobikan Judan” Aoki  to loss via submission at 0:54 of round one of their lightweight bout.

The loss dropped Banario’s record to 14-10. He has lost four of his last fights, including three straight.