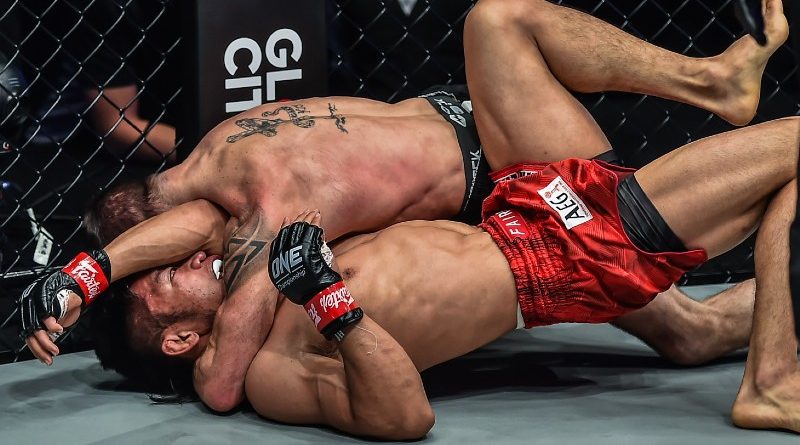 The end came with 3:07 left in the second round of their ONE: Next Gen III main event bout that aired November 26, 2021 and was held at the Singapore Indoor Stadium.

The “Thunder Kid” and “The Mankey God” proved their bout built around intense trashtalk was as good as advertised, a battle of striker versus a grappler.

The two warriors went at each other with viscous words over many things that include ONE strawweights and mullets.

While the bout already looked interesting on paper as both brag excellent win-loss records, the extra fuel added by their trashtalk exchanges made their bout that was supposed to take place back on ONE on TNT II last April was scrapped when the Team Lakay star contracted COVID-19 even more intense.

In the end, it was the self-proclaimed “best strawweight in the world” who had the last laugh after the long wait.

Brooks showed how his being a decorated wrestler during his high school career in Indiana was the x-factor in his ONE debut.

After a few moments of sizing up each other, Brroks immediately went for double-leg take down and brought Adiwang to the mat.

Knowing he was in his territory, “The Monkey God” smothered the Team Lakay firebrand and dropped short elbows on him. He further capitalized on an opportunity to slam Adiwang from inside the guard and continued to chip away with short-range shots to maintain control for much of the round.

“Thunder Kid” finally found a way to his feet late in the frame and immediately went to work. He landed a kick that backed off Brooks and followed it up by firing a right uppercut that cleanly found its target.

Brooks, however, wisely wanted none of the stand-up exchanges and danced around the Circle until the end of the round to avoid damage.

Adiwang launched another strike attack in efforts to catch up in the scorecards with a hard right kick to start the second .

Brooks landed a right hand in reply and then quickly dove for the legs to complete another double leg takedown. He proceeded to continue piling damages with excellent placement of his elbow attacks.

Adiwang tried to create space to get out from underneath the Indiana native’s ground-and-pound and he eventually regained his feet. However, he was immediately captured in a tight guillotine choke.

Adiwang fended off the attack but Brooks wisely moved to a front headlock against the Circle Wall and started firing knees to the head and body, causing a cut above Adiwang’s eye.

The “Thunder Kid” countered by leg shots to the American’s thigh but one seemingly connected foul below the belt, temporarily halting the action to give Brooks a chance to recover.

After the lull, they restarted in the same position and it is at this point that things quickly went south for Adiwang.

“The Monkey God” went straight for his opponent’s legs and then passed into mount off the takedown before sliding in an arm triangle choke when the opportunity presented itself.

The poor positioning forced Adiwang no options but tap out.

“This is not my night again.” said a visibly disappointed Adiwang. “I knew he was tired but that was his last move. I got caught, yeah that’s it” he stated.

He was clearly frustrated as he felt he got the match in the bag. “I know that he was about to get tired. After the guillotine, I knew he was tired. I almost had it”, said the fifth-ranked ONE strawweight in the post-fight interview.

Brooks said he got his eyes on Hiroba Minowa next but emphasized his win should serve notice to Joshua Pacio and the rest of the ONE strawweights.

The was the second of its kind to the Brazilian after falling under similar circumstances more than eight years ago.

The Jiu-Jitsu wizard  forced Catalan to tap at 3:35 of the opening round, slightly faster than his submission in their 2013 meeting.

The win should help Silva retain his fourth ranking in the division despite the uprising Brooks.