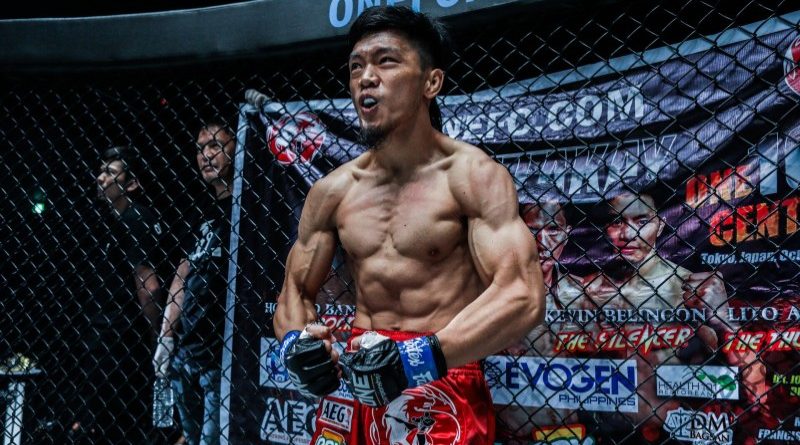 The “Thunder Kid” is back in the ONE circle and is set to face former Shooto Champion Hiroba Minowa of Japan in a three-round mixed martial arts contest at ONE: INSIDE THE MATRIX III, a previously-recorded event from Singapore scheduled for Friday, November 13.

Adiwang is happy to make his return to the ONE Circle and perhaps put together an inspired performance as he is dedicating this fight to his ailing mother.

“I am very excited and happy to be back in action, and continue to do what I love to do. This fight is very special for me. I want to win for my family, especially my mom,” said Adiwang.

In an interview with ONE, The “Thunder Kid” shared that mother Leticia was terminally ill, having survived multiple strokes over the past few years. The 27-year-old from Benguet, Philippines has dedicated his next fight to her honor and hopes he can make her proud once again this Friday night.

“My mother has had a big impact on my life. She is the reason I am who I am today. I thank her for everything in my life, and I am proud and happy to be her son.”

Because of the lockdowns imposed by Covid-19 restrictions in the Philippines, particularly in Baguio City where he resides, Adiwang has taken the extra free time as a blessing, being able to spend more time at home with family while still trying to stay in shape and ready for his next appearance in the Circle.

Since joining ONE Championship by way of Rich Franklin’s ONE Warrior Series, Adiwang has strung together a series of impressive performances. He’s currently riding a seven-bout win streak and is one of the most explosive young stars in the world.

A victory over Minowa this Friday night will certainly continue pushing him in the right direction.

“It’s very important for me to keep my momentum in ONE Championship, because it’s one way for me to be recognized as a top talent in ONE. My goal is to one day become a world champion. Nothing has changed since you last saw me. I’ve only gotten better,” said Adiwang.

“I’ve really done my best in training and to improve myself. That’s the only way I can keep this up. Everytime I step into the Circle, I want to give fans a show they want to watch. Each victory will keep moving me up the ladder until I’ve reached the top.”

Minowa is no doubt a worthy opponent, one that poses specific threats that Adiwang will have to circumnavigate. The Japanese stalwart is a grappling specialist with a penchant for executing some very tricky submissions.

Adiwang knows exactly what he will be up against, and has prepared himself accordingly.

“Hiroba Minowa is a very good fighter. I respect him a lot. He is a young and hungry fighter with a good ground game. I’m not taking him lightly, or any opponent for that matter. I always come for the victory,” said Adiwang.

“I’ve worked hard on all areas for this fight, especially in my ground game and jiu-jitsu, because that’s what he’s good at. But, of course, I’m also focused more on the things that I can do to him, and don’t dwell too much on the things he can do to me.”

This post has already been read 16866 times!…if they played under 1998 rules and style. Sorry, Draymond Green. Yeah, you