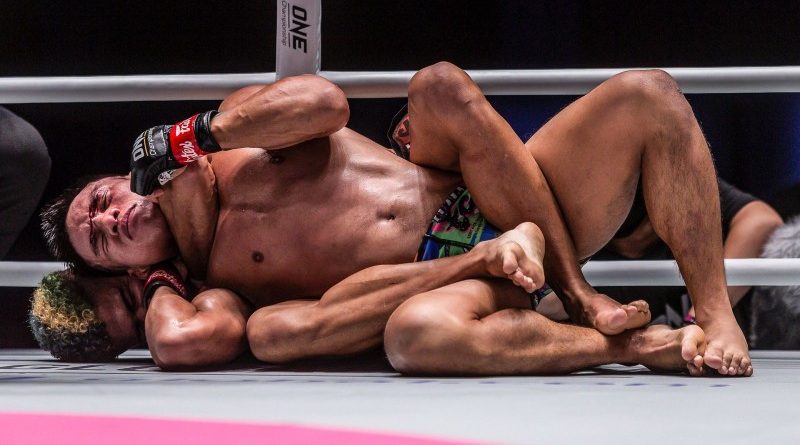 The only Filipino participant in ONE’s return to competitive matches couldn’t come up with a win as Mark Fairtex Abelardo was forced to go to sleep of a choke by Fabricio Andrade .

The Brazilian “Wonder Boy” used his reach to the fullest while successfully docking the power of the Fil-Kiwi “Tyson” in registering a second round submission victory in their catchweight mixed martial arts contest at ONE: No Surrender in Bangkok, Thailand, on Friday, July 31, 2020.

Abelardo started the match aggressively, finding openings to land the big punch while going for the leg for a takedown several times.

After a few tentative moments of sizing up the taller but lankier Brazilian, he started applying and control the pace of the bout, firing heavy leather.

However, Andrade used his reach, both in arms and legs, to disrupt Abelardo’s rhythm in the ring. His counter jabs and low and high kicks were well-placed and timed that they usually found their target as the Fil-Kiwi attempts to charge in and put the pressure.

Probably feeling he let the first round got away, Abelardo pushed into the second round with more intensity of getting to Andrade, charging in while throwing his fists with bad intentions, although still failing to land a solid hit.

His desire to take the action to the mat is also evident as he sacrificed taking a leg and got the break he needed when he caught the kick to force Andrade to the ground.

The takedown couldn’t be completed though as Andrade remained in control and quickly mounted himself at the back of Abelardo, locked his arm in position and put on the squeeze to setup the flawless rear-naked choke finish.

Abelardo refused to tap, forcing the referee to stop the fight after 1:11 has gone into the second when he visibly became limp.

The loss put Abelardo into a tailspin, losing two consecutive and three of his last four outings. He is now 19-8 in his career.

Losses to Troy Worthen last February, 2020 and Shoko Sato in May, 2019 sandwich his only win in the stretch against Jumayi Ayideng in October, 2019.

He was undefeated in two ONE Warrior Series bouts but could only come up with two wins in five fights at the global stage.

Before joining ONE, he put together an impressive 15-5 record with 9 KO’s and 3 submission victories.

He made his way to the global stage of ONE Championship the same manner Lito Adiwang did, winning a six-figure contract through Rich Franklin’s ONE Warrior Series.

He currently fight out of the esteemed Fairtex Camp in Pattaya, Thailand, where he permanently relocated.

He has previously faced two Cordilleran fighters, winning against Harold Banario by TKO in 2015 and losing against current Brave Combat Federation Bantamweight King Stephen Loman in 2016, both taking place under the Pacific Xtreme Combat promotion.

On the other hand, Andrade hikes his record to 4-2, setting his ONE journey off to a good start. ONE considered his promotional debut win an upset.

The Abelardo-Andrade matchup is one of the undercards on ONE’s return to live events after a five-month hiatus. The event, however, was still played without fans.

The other MMA bout showed Stamp Fairtex stopping Sunisa “Thunderstorm” Srisen via TKO at 3:59 of round one in women’s atomweight action.