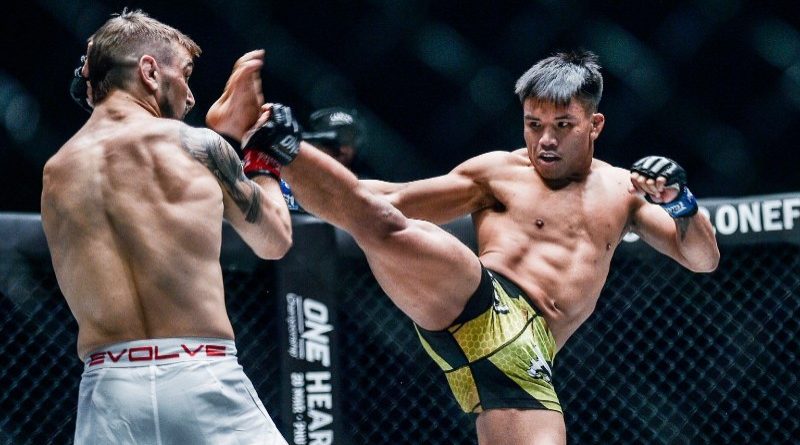 With no participant from Team Lakay or any Philippine based gym in the upcoming July 31 ONE event dubbed “No Surrender”, local fans might want to turn their attention to Filipino-Kiwi Mark Fairtex Abelardo.

Abelardo, a New Zealand born fighter whose parents are both Filipinos, is the only fighter with Philippine connection who has appearance in the event.

The fighter nicknamed “Tyson” is up against Fabricio Andrade of Brazil in a mixed martial arts bout at a catchweight of 67 kilograms.

Only 28, Abelardo has been in the MMA business for quite a while now. He should be familiar to hardcore Filipino fans having appeared in several Pacific Xtreme Combat (PXC) fight cards.

Before joining ONE, he put together an impressive 15-5 record with 9 KO’s and 3 submission victories.

He made his way to the ONE promotion the same manner Lito Adiwang did, winning a six-figure contract through Rich Franklin’s ONE Warrior Series and ultimately earning the right to compete on the global stage of ONE Championship.

He is undefeated in two ONE Warrior Series bouts and is 2-2 at the global stage.

He is one of the fighters training under the esteemed Fairtex Camp in Pattaya, Thailand, where he permanently relocated there to pursue his martial arts dreams full-time.

He has two bouts against Cordilleran fighters, winning against Harold Banario by TKO during PXC 48 on June 13, 2015 and losing against current Brave Combat Federation Bantamweight King Stephen Loman at PXC 55 on November 18, 2016.

According to ONE, he squared off against Ev “E.T.” Ting in a lightweight bout at a Supremacy Fighting Championship show in the duo’s native New Zealand on November 2011.

The match was Abelardo’s third professional contest, and Ting’s second. Despite their youth and relative inexperience, both warriors put on a show.

Over the course of three rounds, the pair battled in a back-and-forth encounter filled with frantic striking exchanges, takedowns, and numerous submission attempts. Ting claimed a narrow split decision win in the close match.

Martial arts run in his family’s blood. Abelardo’s father used to compete in full-contact karate events in the country up to the point he decided to relocate to New Zealand where he opened his own karate dojo.

Abelardo is coming into his next bout trying to reverse his fortunes.

He is coming of a loss to Troy Worthen at ONE: King of the Jungle last February, 2020.

ONE noted that the seasoned veteran prides himself as a man who always learns from his mistakes. He is said to have integrate the strategy used by Worthen when he faces the promotional newcomer Andrade at Bangkok, Thailand.

Worthen’s ability to control the tempo was a major factor against Abelardo during their match.

While he was the one pressing the action, it was his American rival’s wrestling that was stifling him from the opening bell, leading to the “Pretty Boy’s” emerging a victor by unanimous decision.

Now, Abelardo plans to overwhelm the debuting Brazilian in a similar fashion.

“I’ll be looking to mix it all up, both standing and on the ground. I want to pressure him everywhere and just look to break him,” says Abelardo

“I want to utilize a lot of my wrestling, take him down when the opportunity comes, just wear him out, and look for the finish from there.”, he ended.