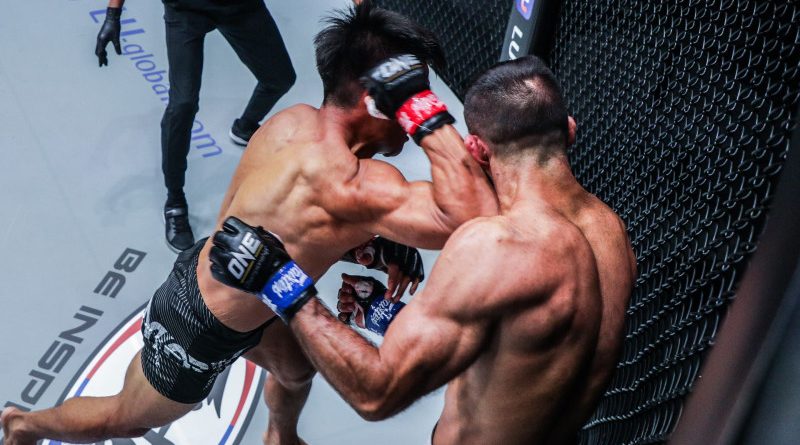 Hard-hitting Mark “Tyson” Fairtex Abelardo put a screeching halt to his two-bout losing streak in ONE Championship by taking out Emilio “The Honey Badger” Urrutia in the evening’s opening bout of ONE: FISTS OF FURY II, aired on Friday, March 5, 2021.

The Fil-Kiwi fighter delivered a devastating tomahawk elbow that locked up the explosive knockout in a movie-like ending sequence, which also puts his quest for the bantamweight title back on track, having lost three of his last four fights.

Abelardo’s elbows turned out to be so deadly during fight night that he walked away from the Singapore Indoor Stadium with a new nickname – “Elbowlardo.”

Abelardo opened the match by stalking Urrutia and working his leg kicks while trying to cut the distance.

The American, on the other hand, measured up Abelardo with his jab while being content to land short uppercuts each time his foe tried moving into the pocket.

That sequence lasted most of the first round, with the Filipino-Kiwi applying pressure and Urrutia patiently waiting for “Tyson” to make a mistake.

However, it was Urrutia who blinked first.

With about 30 seconds remaining in the opening frame, Abelardo popped “The Honey Badger” with a solid straight right hand, sending him back into the Circle Wall with his legs wobbled.

Seeing a clear opportunity to finish, Abelardo swarmed, connecting on hooks and landing about ten unanswered elbows to his opponent, though Urrutia was a tough nut to crack and managed to survive as the bell rang.

Abelardo then picked up where he left off in the second round, as he looked more loose in letting his hands go, landing a right cross and a left hook as his opponent tried to engage.

Sensing that Abelardo was gaining momentum on the feet, Urrutia tried to change gears, dropping for a double-leg takedown, which Abelardo easily shook off.

“Tyson” continued utilizing his kicks on the feet while Urrutia looked for a takedown. He even caught Abelardo’s body kick and tried to turn it into a favorable position, but the Filipino-Kiwi wasn’t having any of it.

With plenty of confidence, Abelardo was happy to exchange punches on the feet, and while Urrutia responded with combinations of his own, the momentum was clearly in the Fairtex representative’s favor.

That set the stage for Abelardo’s highlight-reel finish, with both men going for a killer shot.

Probably both sensing an opening , Urrutia fired a looping left hook that connected to the side of the head of Abelardo, who simultaneously is launching forward with a perfect tomahawk elbow that connected with his rival’s jaw.

Both men felt each others’ missile forcing them to drop to the canvass but Abelardo’s hit clearly did more damage by  turning off Urrutia’s lights.

Abelardo was clearly still in conscious territory as he quickly got up to deliver another finishing elbow only to be timely shoved away by Referee Muhammad Sulaiman from the fallen Urrutia at 3:20 of round two to prevent further injury.

Abelardo improves his record to 20-8 that includes 12 knockouts and 3 submissions while dropping Urrutia to 11-8, now with four losses by knockouts.

It was a key bounce-back win for Abelardo, who will look to continue scaling the bantamweight ladder after suffering a rear naked choke loss to Fabricio Andrade and being brought down by Shoko Sato on punches during his losing streak.

Prior to his newly-stopped skid, he was on a five-bout winning roll, including two in the ONE Warrior series on 2018 and one during ONE: Clash of Legends on February 2019.

“The Sniper” will be making his debut under the ONE banner on April 29, 2021 against John “Hands of Stone” Lineker.

Abelardo now possibly has to deal with both men should continue his successful journey to the top of ONE’s bantamweight division.