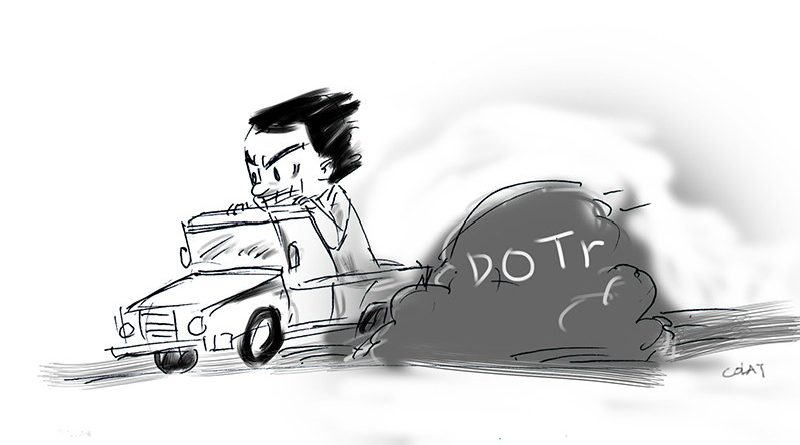 LA TRINIDAD, Benguet  – Some members of a local transport group revealed that the camp of embattled assistant regional director Mohammad Naser Abbas of the Cordillera office of the Department of Transportation (DOTr-CAR) is now allegedly attempting to settle some of the complainants against him for them to retract their previous statements that he allegedly extorted money from them in exchange for the francise of their Tamaraw Fx vehicles which was never realized.

In his 5-age sworn statement, Apolinario Anaydos, a resident of Tomay, here and a member of the Cruz, Alapang, Bahong, Alno Cooperative Operators and Drivers Association (CABACODA), admitted that lately, he was approached by a certain David Odayan, a fellow member of the group, who requested him to go with the latter to meet Jonathan Patnugot alias Jojo, a close aide of Abbas, who was reportedly asking him to negotiate his retraction or repudiation of the statements he made against Jojo, Abbas and Lawrence Amistoso.

However Anaydos, who is a kidney patient undergoing twice a week dialysis treatment, claimed that he did not meet with Jojo because he stands by all the previous statements he made in the joint affidavit which was earlier published as well as in his latest sworn statement.

“Why did they not file against me for perjury if they are so sure that my statements were untrue” Anaydos asked.

Anaydos disclosed that he was allegedly duped into giving a total of P50,000 all for the supposed transport franchise promised by Abbas and that his kidneys have failed so he had to undergo dialysis sessions twice a week.

Worst, he was forced to scrape up whatever money he had just to pay for what was supposedly needed to be paid for the issuance of the said franchise because considering his present condition, driving is the only occupation that he knows he can perform to be able to earn an income to finance his dialysis sessions and to provide for his family.

Aside from the P10,000 supposed processing fee that he paid which was allegedly deposited in the account of the DOTr central office, Anaydos paid P8,000 to Jojo for him to take care of the alleged problems in the documents of his vehicle that was initially inspected, another P25,000 was again handed by him to Jojo to rectify the alleged tampered engine number of his vehicle, the P5,000 for the release of the questionable temporary special permit and P2,000 for the supposed expenses that were incurred in the inspection of the route to be travelled by their vehicles.

In a separate 5-page affidavit, Anthony Pulido, a resident of Cruz here and a CABACODA member, confirmed that a few days ago, Odayan allegedly approached him and Anaydos and asked the latter to go with him and meet Jojo so that they could talk about his retracting his statements he made against the Abbas camp.

Pulido averred that up to now, no transport franchise has been issued to them by Abbas despite his promise to do so and that they were made to realize that Abbas has no power to issue a franchise to them in the first place.

“We now realize that we had been hoodwinked to part with our hard earned money and that the promises that Abbas made to them are as empty as our pockets have become,” Pulido stressed.

Initially, Pulido admitted that he was already hesitant to pay for the P5,000 being requested from them for the special permit but he was subsequently called to the house of Odayan and there, he met Jojo and Darwin and then Abbas then called Jojo’s mobile phone who eventually handed the same to Odayan, who engaged the speaker function of the cellphone so that all of them present will hear the conversation.

He admitted that he clearly heard Abbas talking on the celphone instructing Odayan to collect from each of the CABACODA members the P5,000 payments for the special permits so that Abbas would already sign and release them.

Pulido claimed that he was able to identify the voice of Abbas on the other side of the phone because he was quite familiar with his voice considering that he was with the group who met and talked to him personally in his office at the LTO Baguio City and he had heard him speak several times in radio and television interviews.

Having heard Abbas speak on the other side of the phone, he said that he then paid the P5,000 required by the officials for the release  of the special permit and he was eventually issued one which was signed by Abbas which bore the license plate number of his vehicle.

However, after a month or so, Amistoso allegedly retrieved all of the special permits issued to them and he foolishly handed the document back to him while Anaydos was able to keep the said special permit which is now being used as one of the evidences against Abbas in the cases filed against him.

However, Chin and Pasigon did not actually affix their signatures on the said affidavit although their names were on the front page of the said document.

Chin even called up the office of Herald Express and claimed that he was not a part of the group that issued the joint affidavit but his colleagues refuted his revelations, claiming that he was part of the meeting and consented to the issuance of the said document.

Chin claimed that his name should be cleared because he did not sign the document although his name was also part of the joint affidavit that was forwarded to the municipal council for the conduct of an investigation on the anomalies.