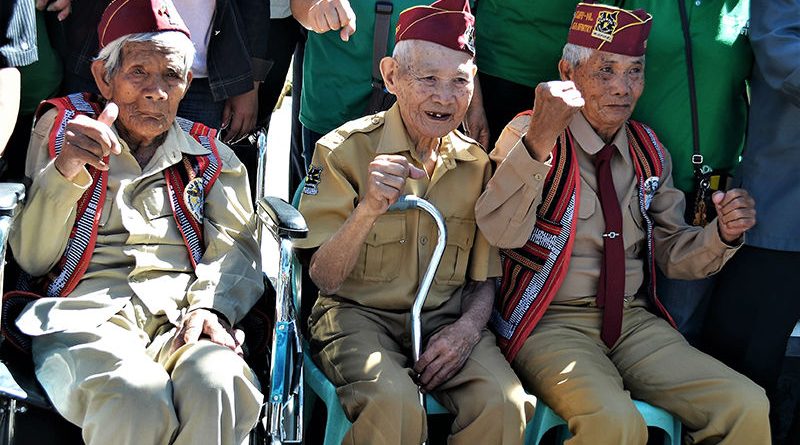 BAGUIO CITY – A handful of World War II veterans were honored during the 73rd Liberation of Baguio Commemoration at the Veterans park along Harrison road, last Friday morning.

Flowers and wreaths were offered by city officials and sons and daughters of veterans, as a 21-gun salute and taps were rendered by the Baguio City Police Office (BCPO).

Vice-Mayor Edison Bilog in his opening message emphasized on the veterans’ being life models to the youth as to bravery and gallantry.

Guest of honor and speaker BGen. Leopoldo Imbang, Jr. who was unable to attend was represented by North Luzon Command Deputy Brigade Commander Henry Doyaoen who called on the youth to accept leadership roles and take action in present-day battles. Privileges and rights should be equal to responsibilities to fellowmen and country, as the veterans lives mirrored; Doyaoen pointed out.

Our forever gratefulness for veterans’ shed blood and life sacrifices may be repaid with our own efforts to quell violence and turmoil in our country, wrought by different ideologies and movements within our own communities, Doyaoen said.

We remember the veterans’ sacrifices battles, as we live in peace-which we pass on to our children, and children’s children; he ended.

Mayor Mauricio Domogan spoke of the veterans as the symbol and foundation of sacrifices who we honor through our deeds for the betterment of fellowmen, and peace in our own city. Our freedom gives us the opportunity to wage war on the ills of society, the mayor said. We are even allowed to surpass our forebears’ victorious accomplishments, he added.

Historical details reveal that war started and ended in Baguio with the bombing of Camp John Hay on Dec. 8, 1941 and Gen. Yamashita’s signing of the deed of surrender on September 3, 1945, still here in the city.

Ordinance 33, series of 1990 declared April 27 of every year as Liberation Day and in Baguio, as Veterans Day. It can be recalled that in 1945, there were 3,347 servicemen and women in Baguio and Benguet who without qualms willingly offered their lives for the nation.

Living veterans are now in their 90s and late 80s, with at least 50 veterans in the Baguio-Benguet area; who with their departed comrades fought actual combats along Naguilian, Kennon road, Tuba Trail, Sablan, Acop’s place, Tublay, and even in Asingan, Pangasinan. There were no fierce fights in Baguio and La Trinidad, veterans earlier recalled.

Traditional Benguet rites were performed for the veterans at the Veterans’ office, Camp Allen.