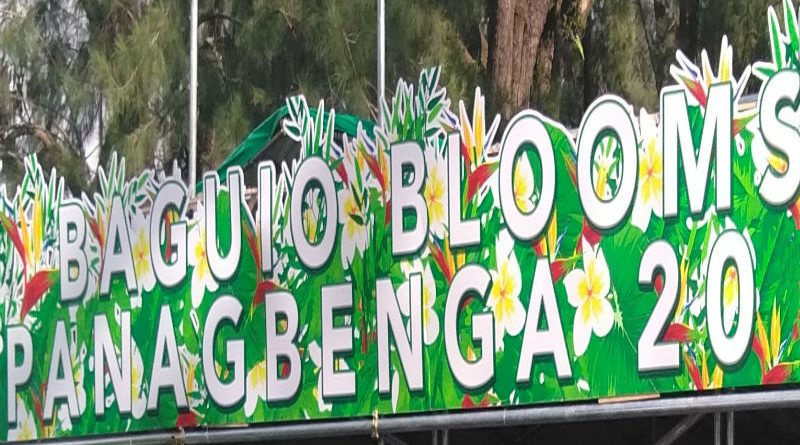 BAGUIO CITY – Some sixty-two exhibitors are now displaying their products the new site of the ongoing Baguio Blooms Exposition and Exhibition which is within the Baguio Convention Center grounds as part of the 25th edition of the Panagbenga, popularly known as the Baguio flower festival.

Malou Galiste, chairperson of this year’s Baguio Blooms Exposition and Exhibition and Session road in Bloom, said that the Baguio Flower Festival Foundation, Inc. (BFFFI) released some 300 applications for interested participants of the month-long exhibit of handicrafts and flower-inspired products but only 80 exhibitors responded to the call for the submission of intent to join one of the major highlights of the flower festival.

She disclosed that of the 80 exhibitors that submitted their completed applications for stalls in the exhibit area, 18 reportedly backed out because of the recent Corona Virus Disease (COVID) 2019 scare that resulted to the eventual re-scheduling of the grand opening parade of the festival and other major highlights of the Panagbenga next month.

The BFFFI official claimed that of the 62 exhibitors, 18 are landscapers who joined the carpet of flowers and vertical landscaping competition of the flower festival.

According to her, the BFFFI already submitted a request to the local government for the possible extension of the ongoing Baguio Bloom Exhibition and Exposition from its earlier scheduled commencement on March 8, 2020 to April 15, 2020 to allow the participating exhibitors to be able to recover their investments for their participation to the said activity.

Earlier, Major Benjamin B. Magalong expressed his support to the proposed extension of the ongoing Baguio Bloom Exposition and Exhibition at the Baguio Convention Center considering the untimely postponement of the major activities of the Panagbenga due to the COVID scare to allow the exhibitors to be able to gain from their participation in the said event.

Galiste assured that the BFFFI will not  collect additional fees from the exhibitors when the said activity will be extended because the request for the additional time for the exhibition is a gesture of the organizers to make sure that the participants will be able to gain from the said event.

The request to extend the conduct of the month-long Baguio Blooms Exposition and Exhibition from March 8, 2020 to April 15, 2020 is now pending deliberation with the local legislative body.

Previously, the conduct of the former market encounter, now known as the Baguio Blooms Exposition and Exhibition, was done within the Camp John Hay during the early years of the Panagbenga before it was transferred to the Burnham Lake Drive until last year.

The Baguio Blooms Exposition and Exhibition s one of the major income-generating activities of the Panagbenga to help in defraying the expenses that will be incurred by the major highlights and the community led events of the festival considering that the local government already pulled out its P4 million annual subsidy to the festival paving the way for the conduct of the 25th edition as a purely private initiative of the foundations the local government will only swerve as a supporting cast in the conduct of all the events that had been lined up for the festival.

This post has already been read 761 times!LA TRINIDAD, Benguet –  Benguet Caretaker Congressman and Anti-Crime and Terrorism through Community