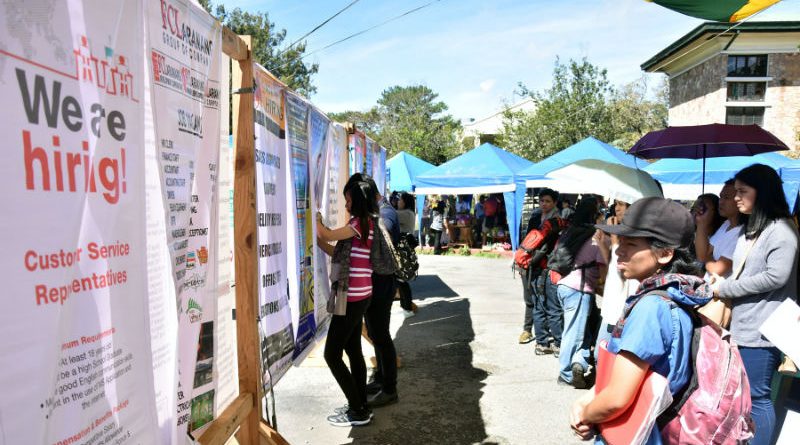 BAGUIO CITY  – Some five hundred forty four job applicants were hired on the spot by various overseas and local employment companies during the one-day jobs and business fair held at the Baguio City National High School (BCNHS) gymnasium last May 1, 2018.

Based on the data obtained from the city’s Public Employment and Services Office (PESO), there were a total of 3,824 registered job applicants during the whole day jobs and business fair wherein 2,186 applicants tried their luck for local employment while some 1,638 job seekers applied for the various overseas job openings.

On the other hand, there were a total of 1,928 near hire applicants that were composed of 1,203 applicants for local jobs and 725 aspirants for overseas placements.

Further, there were some 109 applicants that were referred to the Technical Education and Skills Development Authority (TESDA) for further trainings to enhance their skills for their desired local and overseas jobs that were available during the jobs and business fair.

The PESO explained that near hire applicants were those who were considered hired by the participating local and overseas employment companies but they need to submit additional or lacking requirements or may need to attend further screening procedures by their prospective employers.

Mayor Mauricio G. Domogan expressed his gratitude to the participating local and overseas employment companies for making available some 18,000 jobs that were applied for by the interested job seekers during the labor Day jobs and business fair.

He also extended his greetings to the job applicants who were hired on the spot and the near hire applicants for having gained employment through the activity that was initiated by the local government, the Department of Labor and Employment (DOLE) and the Department of Trade and Industry (DTI).