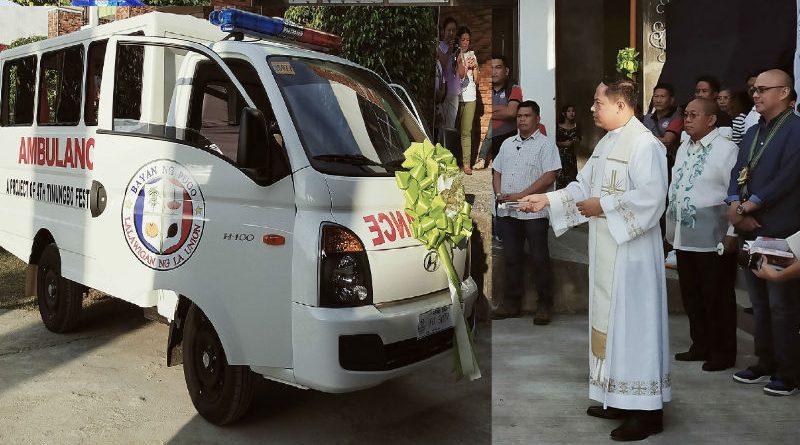 PUGO, La Union  – The Tinungbo Organizing Committee was able to acquire a fully equipped brand-new ambulance for the local government from the proceeds of the upcoming conduct of the month-long 4th Tinungbo festival.

The Tinungbo Organizing committee serves as the local government’s private sector partner in the conduct of the town’s major crowd drawing event which is now on its 4 year and continues to draw the interest of visitors to the different tourist destinations in the municipality.

Mayor Priscil M. Martin said that the success of the annual conduct of the Tinungbo festival can be attributed to the overwhelming support that the organizers get from the people and those natives of the municipality who are working outside the town and even overseas.

She underscored that the visible accomplishments achieved by the annual conduct of the festival only shows that the valuable contributions of the people in terms of sponsorship among others are serving a cause where the residents of the municipality are benefitting.

During the initial staging of the Tinungbo festival, organizers were able to purchase an ambulance that was turned over to the local government to cater to the emergency needs of residents having health problems among others.

Further, the Tinungbo Organizing Committee was again able to purchase 19 laptop computers which were distributed to the different public and private basic education institutions in the municipality wherein the funds were drawn from the proceeds of the second staging of the festival.

An emergency rescue vehicle was procured by the organizers from the proceeds of the third edition of the Tinungbo festival and the same was turned over for the use of the Municipal disaster Risk Reduction and Management Office (MDRRMO) for the residents of the 14 barangays who are in need of emergency transport and  during emergency situations and the wrath of natural calamities.

The local chief executive expressed her gratitude to the people of the municipality and those from outside the locality for their continuous support to the successful conduct of the town’s major crowd drawing activity that showcases the rich culture and traditions of the local residents who were able to embrace the balance between the culture of both the highlands and the lowlands.

The Tinungbo Organizing Committee and the local government recently launched the conduct of the 4th Tinungbo festival during the 107th founding anniversary of the municipality that was held at the newly constructed farmers multi-purpose center recently.

The festivities started with the conduct of the float parade wherein the town’s 14 barangays showcased the Tinungbo festival through the floats that they presented that drew the interest of local residents and visitors alike.

By HENT
Banner photo: Tinungbo is not only a festival but a festival for a cause. Parish priest of Pugo La Union blessed the second ambulance acquired through the Tinungbo Festival. Photo by Joseph B. Manzano