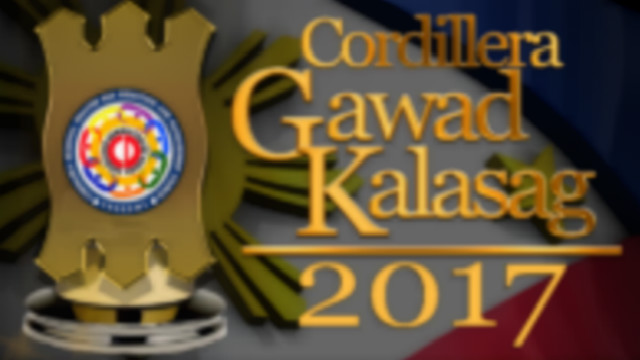 Two schools and two Local Disaster Risk Reduction and Management (DRRM) Councils in the Cordillera Administrative Region were recognized during the 19th National Gawad KALASAG awards on December 11, 2017 in Ortigas, Manila for their outstanding contribution and commitment in the field of DRRM and humanitarian assistance.

The University of the Cordilleras in Baguio City was hailed as the Best Higher Education Institution in the country.

The awardees received plaques of recognition and cash prizes worth P100,000 for first place, P75,000 and P50,000 for the second and third place winners, respectively.

“With this award comes great responsibility in doing ordinary things extraordinarily for the benefit of many,” University of the Cordilleras VP for Administration Leonarda Aguinalde said.

Among the merits of the winners from CAR that stood out are the impressing of bayanihan spirit during emergencies and disasters, empowerment of local capacities, advancement of DRRM through innovative research programs, use of effective climate change adaptation technology, and strengthening disaster preparedness through the use of local dialect in information campaigns.

“We need to sustain this practice in order to attain our goal of zero casualty. The goal of the awards is to promote the localization of DRR because local councils, communities, and schools are on the frontlines of disasters,” Undersecretary Ricardo Jalad said in his speech during the awarding ceremony.

The four national awardees also topped the Regional Cordillera Gawad KALASAG in their respective categories and were recognized during an awarding ceremony on December 1, 2017 in Baguio City.

Apart from recognizing efforts and commitment in DRRM, the Cordillera DRRM Council also celebrated its partnerships with various stakeholders who are also very vital in strengthening DRRM.