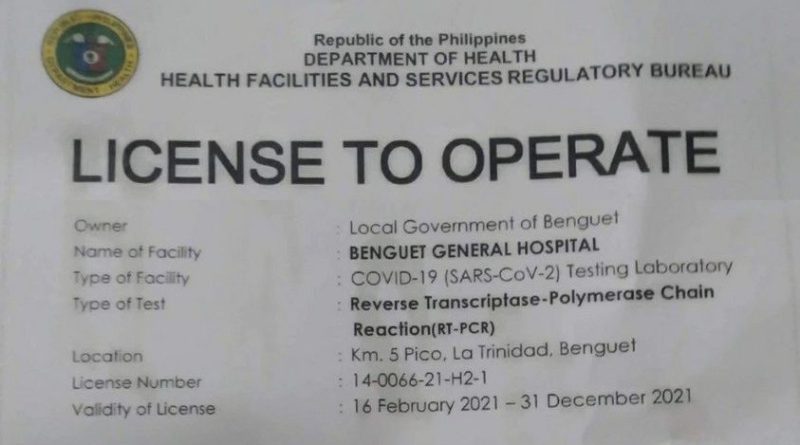 LA TRINIDAD, Benguet – The third molecular laboratory in the Cordillera that will be based in the Benguet General Hospital (BeGH) will be operational soon after the health department shall have issued the license to operate of the newest Coronavirus Disease 2019 (COVID-19) facility.

Kevin Edward See, Chief of Staff of Benguet Caretaker Congressman and Anti-Crime and Terrorism through Community Involvement and Support (ACT-CIS) Party-list Rep. Eric Yap, stated that the BeGH administration was able to complete the required documents of the facility which were subsequently submitted to the health department as part of the ongoing process for the issuance of the license to operate of the facility.

Further, he claimed that the units of equipment of the facility already passed the efficiency requirement which is part of the final stages of the licensing process prior to the issuance of the agency’s license that will pave the way for the operation of the province’s molecular laboratory to help in speeding up the release of swab test results being submitted for the reverse transcription polymerase chain reaction (RT-PCR) test, the established gold standard in determining whether or not an individual is infected with the deadly virus.

Last year, Congressman Yap shelled out his personal resources to facilitate the construction of the multi-million BeGH molecular laboratory aside from providing the required RT-PCR and automated extraction machines and reagents that will be used in performing the tests of the specimens being submitted for testing.

Supposedly, the BeGH molecular laboratory was operational last October but the processing of the license to operate was delayed because of technical issues and concerns in the operation of the provided units of equipment until such time that the same were subsequently addressed with the health of technical experts who were hired for the said purpose.

The lawmaker pointed out that the molecular laboratory will cater to the conduct of RT-PCR tests to the specimens coming from not only Benguet but also in other neighboring provinces that need the services of the additional facility that was established within the BeGH compound.

According to him, Benguet will continue to extend a helping hand to other provinces that need the services of the province’s molecular laboratory because the same was established to help in speeding up the release of swab test results to prevent people from waiting for a long period of time in quarantine and isolation facilities which could affect their mental health.

The caretaker congressman emphasized that fastracking the release of the swab test results of suspected or probable COVID cases will lessen the chances of the individuals to suffer from mental health issues that might affect their existing health condition.

Yap appealed to the people of Benguet to understand the delay in the supposed operation of the province’s molecular laboratory as efforts are being done by his office to fastrack the same so that suspected and probable COVID cases could be immediately detected and screened to contain the spread of the virus in the province which might overwhelm the local health care system and stress the frontliners. By HENT