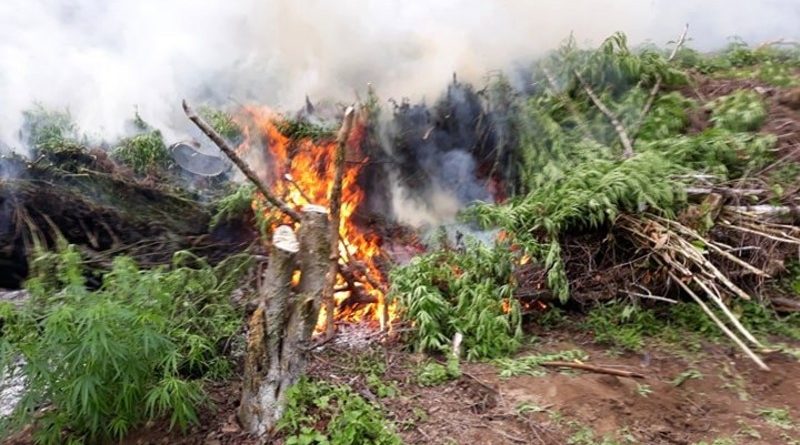 A total of 3 million pesos worth of marijuana plants were discovered and destroyed in the Cordillera region in a separate marijuana eradication operations in the Province of Benguet and Kalinga.

In the province of Benguet, operatives from Benguet PPO were able to discover in the mountainous area of Sitio Napsong, Brgy. Madaymen in Kibungan an estimated 10,000 pieces of fully grown marijuana plants cultivated in a land area of more or less 2,000 square meters. Said marijuana plants has an estimated Standard Drug Price (SDP) value of Php 2,000,000.00.

Meanwhile, in the province of Kalinga, operatives from Kalinga PPO conducted a marijuana eradication operation in the village of Buscalan in the town of Tinglayan. Operatives from Kalinga PPO were able to find two marijuana plantation sites planted with estimated 5,000 pieces of fully grown marijuana plants with a SDP value of Php 1,000,000.00. The plants were uprooted on the two sites with an estimated land area of 2,000 square meters.

All marijuana plants discovered was uprooted and burned on site. Operatives only brought samples for evidentiary purposes.

For November alone, PROCOR has uprooted and burned an estimated 78,583 fully grown marijuana plants and 2,500 marijuana seedlings amounting to a Dangerous Drugs Board (DDB) value of Php15,816,000.00 from a total of eight marijuana eradication operations conducted. (PROCOR PIO)

17       17SharesThis post has already been read 915 times!The ongoing negotiations between the members of the city’s Public Private Partnership for