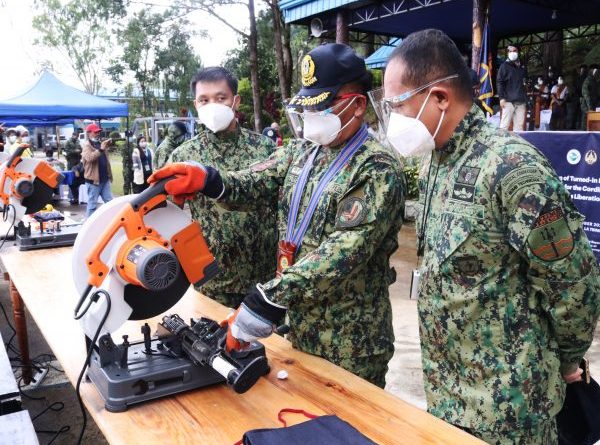 LA TRINIDAD, Benguet – Some three hundred thirty-nine firearms that were turned in by combatants of the Cordillera Bodong Administration – Cordillera Peoples Liberation Army (CBA-CPLA) were successfully decommissioned by joint police and military authorities as part of the government’s normalization efforts under the historic Mount Data peace agreement over three decades ago.

Abra Vice Governor and CPLA chairman Ronald Balao-as said that the decommissioning and destruction of the turned in firearms is part of the organization’s long standing commitment to the government to adhere to the peaceful processes for the achievement of lasting peace in the whole region.

He pointed out that the CBA-CPLA remains committed to sustain the gains of the historic Mount Data peace agreement in the Cordillera and what is being awaited is for the government to fulfil its commitment to the peace process, particularly the grant of the establishment of the autonomous region status of the whole region.

Balao-as asserted that the group will sustain fostering harmonious working relationship with the government through various means to help in the realization of the goals and objectives of the peace agreement which is geared towards the overall growth and development of the region by allowing the Cordillerans to govern the regional government.

For his part, Presidential Peace Adviser Carlito Galvez, Jr. expressed his gratitude to the CBA-CPLA leadership, the police and military authorities, among other stakeholders, for their unrelenting and uncompromising commitment to peace and development in the region through the initial turning in of the firearms, saying that such gesture is a giant step towards helping convince the national leadership to strongly support the group through its various endeavors towards self-determination.

While working on the inclusion of the proposed autonomy bills as one of the priority legislative agenda of President Rodrigo Duterte, Secretary Galvez disclosed that the newly created joint evaluation and monitoring committee composed of representatives from concerned government agencies and police and military authorities is working out the allocation of some P200 to P300 million to be used for the socio-economic and livelihood projects of the combatants who sacrificed their lives just to get the attention of the government in recognizing their legitimate peoples issues and concerns.

The Palace official claimed that the government remains committed in fulfilling its obligations under the 1986 Mount Data peace agreement because it is fully aware of the root causes of the previous armed struggle in the past.

According to him, the decision of the CBA-CPLA to join forces with the government in charting the country’s peace road map is a significant achievement for the realization of lasting peace, especially that the Bangsamoro Autonomous Region of Muslim Mindanao (BARMM) was already realized during the present administration, thus, the closure of the peace agreement in the Cordillera has been elevated as one of the priority thrusts of the government through the Office of the Presidential Adviser on the Peace Process (OPAPP). By HENT

PHOTO CAPTION: The Office of the Presidential Adviser on the Peace Process leads the destruction of turned-in firearms at Camp Bado Dangwa in La trinidad, Benguet, 23 October 2020. The surrendered guns were an offshoot of the normalization program for the Cordillera Bodong Administration-Cordillera peoples Liberation Army (CBA-CPLA). Photo credits to PROCOR PIO

This post has already been read 17088 times!…if they played under 1998 rules and style. Sorry, Draymond Green. Yeah, you