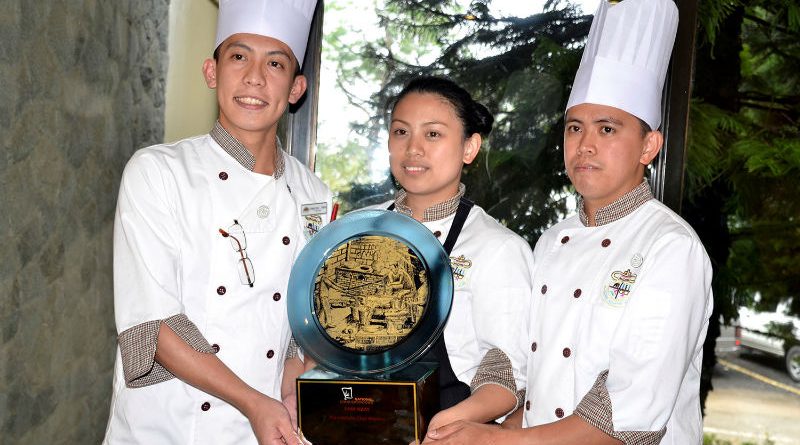 BAGUIO CITY,  – Three young chefs of the city’s only exclusive club stamped their class in the recently concluded National Food Showdown and earned the right to represent the country in an internal competition in Singapore this year.

Anthony de Leon, general manager of the Baguio Country Club (BCC) and president of the Hotel and Restaurant Association of Baguio (HRAB), named the three multi-titled chefs as Crispian Dave Pettoco, Phobe Pocais and Jayson Cacheco  who earned the right to represent the country in the international tilt in Singapore, competing against the best of the best in the world culinary industry.

The three won the professional category of the national food showdown representing Luzon as they bested the best culinary professionals from other parts of the country showing that local talents have a place in the national and international culinary competitions.

De Leon said the competitors will vie against the best chef competitors from Japan, China, Singapore, France and other European countries who already signified their intention to join the prestigious international culinary competition.

Pettoco said that in the Singapore competition, the three Filipino contenders will highlight Filipino dishes. “We want to lift-up the Filipino dishes,” but they have to wait for the advice of the organizers on what ingredients to capitalize on, as that would determine what dishes they will be showcasing in the international tilt, he stressed.

Cacheco added, “one thing is for sure, Filipino dishes gusto natin ilabas.”

During the national competition from July 20 to 21 at the SMX Convention Center in Bacolod City where they vied against representatives from the Visayas and Mindanao, the three worked hand-in-hand on an appetizer, main course and desert using egg as the primary ingredient of their delicacy.

For the appetizer, Phobe Pocais said she prepared a foam with egg yoke. She did this by sucking the content of the egg and changed it into chocolate which came as a surprise when cracked.

For the main course, Cachero said he did an herbed dish with egg, a “champorado crocket” accompanied by chocolate. He topped it with Mexico’s national sauce “Mole” to add to the flavor.

Pettoco, who did the desert, gave the “palitaw” a twist by using a “yema” as filling, noting that “palitaw” is no longer appreciated so much anymore. “I made use of glutinous rice, mixed with egg white and placed yema as filling. I also assembled an egg shape and used the egg white as merengue which is french in nature and I used the chocolate to make a nest with sabayon sauce using egg and ‘latic’ and topped with local fruits like strawberry and mango.”

He said, “I wanted to lift the Filipino dessert. When it comes to egg and chocolate, one can make a variety of desserts including egg-base custard, leche flan, braso de Mercedes, but decided on making ‘yema’.”

Pocais said that while they did not have the chance to practice well before they competition, their experience at Baguio Country Club came handy. “We had the dedication and the passion to do whatever it takes. We had teamwork and mostly prayers as the team representing Luzon to be able to get the bacon home.”

She said that their coaches Carlito Sagun, Richard Edison Soriano and Gemma Milagros Padsico also did a good job helping them win the competition.

Pettoco, who is 23 years old, has been with the Country Club for two years – his first job after graduating at the University of Baguio.