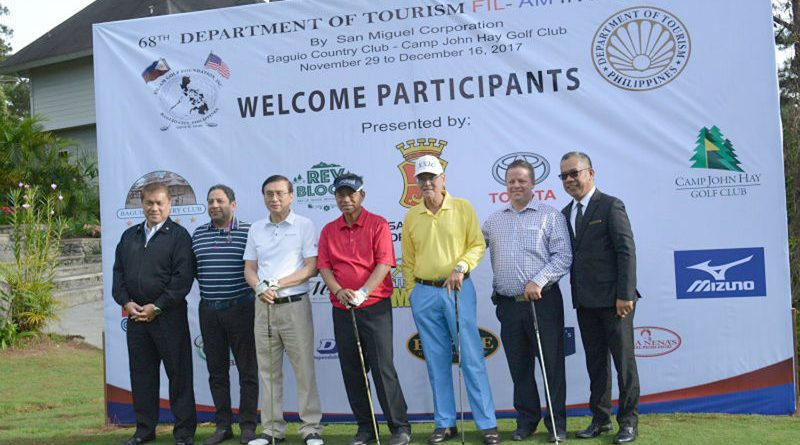 BAGUIO CITY – Three teams occupied the top spot after shooting the same output at the start of competition in Fil A at the BCC layout as teams from the Championship flights of the 68th Department of Tourism Fil-Am Invitational Golf Tournament also kicked off their respective bids at the Baguio Country Club and Camp John Hay golf courses today (Dec 3).

Host BCC, Forest Hills and Nueva Ecija all shot similar 88 points to share the top position even as another r team is just three shots down.

Isaac Go shot 27 points to lead the co-host even as Ed Montenegro came in with 22, Mars Garcia with 21 and Bong de Guzman churned in 18 points to count in the five to play four to count tournament presented by San Miguel Corporation.

Boo Keon Jung, meanwhile topscored for Forest Hills with 26, Rodolfo Villa had 24, while Armando Buenaventura and Gene Lim chipped in 20 and 18, respectively for the team’s game tying 88.

Nueva Ecija, on the other hand, had 24 points from Ed Manzanares, a pair of 22s from Bobby Inigo and Butch Bakunawa and 1 20 from Doy Mercado.
Bernie Balagtas scored 26 points to lead Macquarie Links Australia to lurk behind the three squads with 85 points.

Herminio Salvio shot 29 points and opened San Miguel’s bid with a five point lead in Seniors Am A. With 28 points from Efren Alvez and a pair of 25s from Domingo Manuel and Ariel Javelalosa, San Miguel assembled 107 points to lead the six squad flight at the longer CJH course.

Wednesday Club Mimosa leaned on Senen Quiambao who shot 30 points for the team’s 102 points. Scorers for the team are: Wolf Simandl (29), Willy Valencia (28) and Noel Yamzon (15).

Two shots down is Team Na Koa with 100 on the pair of 30s of Vic Ovales and Eugene Chiong and a 23 and 21 from Rene Ramos and Rick Ballucanag.
Okinawa is just another point down in the flight.

Meanwhile, Guam Golf Swingers tapered down in day two when it shot 72 points for 158 points for a measly single point lead on a suddenly hot Teerifics which shot the day’s best of 86 in Fil B.

The Guamanians got 22 from Noly Carino, 20 from Jeff Lowery, 19 from Dan Ganacias and 11 from Willie Jamero as they take a day break before going to the longer CJH course.

Teerifics got a pair of 26s from Ding Sevilla and Pol Sanchez, while Ramon Bernabe and Art Carlos added a 22 and 16, respectively. Tom Adarme churned in 16 points and did not count.

Gol F Veterans is another shot down after a 73 on the 21 of Jun Bucago, 20 of Jose Cortina, 17 of Danny Gonzales and 15 of Flor Fajilan as the erstwhile second ranked team moved down to third spot, four up on Brent Residences.

BCC shot 78 points for 161 points and retain a single point lead on PR Bank – Isabela which nipped two off the leader.
Jun Basabica led BCC with 22, even as Paeng Ding, Herr Bautista and Mon Aldana chipped in 20, 19 and 17, in that order to count for the team.

Noel Binag scored 22, Willy Enciso and Ferdinand Ambatali made a similar 20 and Mel Asis came in with 18 as the team matched its first day production of 80 for a 160 aggregate and a looming showdown with the co-host in the last two days.