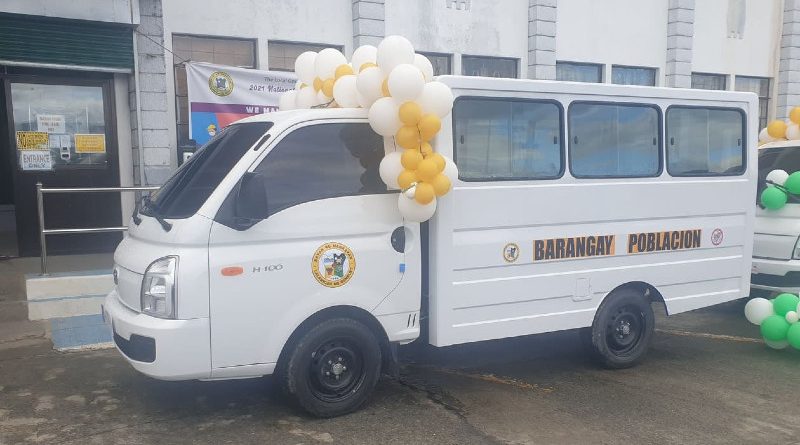 MANKAYAN, Benguet – The municipal government recently turned over to barangay officials of the town’s three lower barangays the multipurpose vehicles as part of the incentives given by the local government for their exemplary performance in effectively and efficiently managing the Coronavirus Disease 2019 (COVID-19) cases and their overall response to the pandemic during the various levels of community quarantine since last year.

Municipal officials led by Mayor Frenzel Ayong turned over to the punong barangays the respective keys of the vehicles purchased by the municipal government for their use in their various barangay activities and ongoing COVID response efforts.

Earlier, the municipal government turned over to the 6 upland barangays, particularly Balili, Guinaoang, Bulalacao, Taneg, Suyoc-Palasaan and Tabio, similar vehicles as the local government’s way of expressing its gratitude to the barangay officials and farmers who consistently donated their agricultural produce to beneficiaries inside and outside the municipality at the height of the various levels of community quarantine since last year.

Mayor Ayong disclosed that the vehicles for barangays Cabiten, Colalo and Bedbed will soon be purchased by the municipal government by the end of the year or early next year to complete the provision of these vehicles to the town’s 12 barangays.

He claimed that the availability of the multipurpose vehicles in the barangays will contribute in the efforts of the local government to immediately respond to the needs of their constituents, especially on transportation for various purposes, instead of having to wait for some time for such requests to be acted upon by concerned offices.

Supposedly, the three multipurpose vehicles were to be turned over to the recipients during the celebration of the town’s 108th founding anniversary last March 11, 2021 but the supplier could not deliver the said vehicles on time thus these were turned over only last Monday, March 22, 2021.

Ayong expressed his gratitude to the officials and residents of the different barangays for their anti-Coronavirus Disease 2019 (COVID-19) responses that allowed the municipal government to control the spread of the deadly virus in the municipality over the past several months, thus, the need for them to sustain the implementation of the basic health and safety protocols as these are the only available means to prevent people from contracting the virus.

He also urged the residents to be informed on the benefits of the vaccines so that they will voluntarily have themselves be vaccinated once these vaccines arrive. By HENT