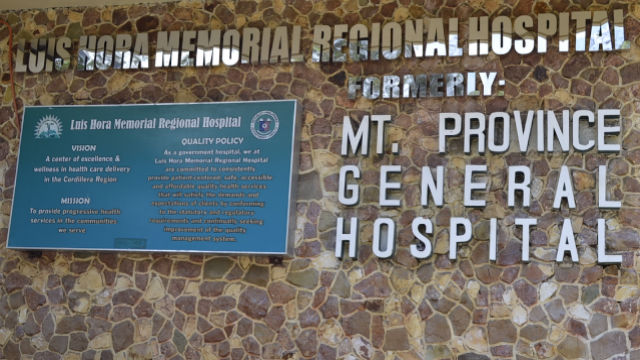 BAUKO, Mountain Province – The Luis Hora Regional Memorial Hospital (LHRMH) disclosed that the second molecular laboratory in the Cordillera based in the hospital is now operational catering to the swab tests of individuals that are included in the priority sectors based on guidelines from the health department.

LHRMH medical center chief Dr. Eduardo Calpito reported that the laboratory is now performing some 88 to 89 tests daily on swab specimens of individuals from the list of priorities from the health department with a turnaround time of 24 to 48 hours to help in speeding up the release of the test results from the different parts of the province.

He said that the hospital spent approximately P15 million to operationalize the molecular laboratory from the hospital’s income and other fund sources to help in facilitating the immediate release of swab test results from specimens coming from the identified priority sectors.

Calpito added that the hospital’s molecular laboratory was also accredited by the Philippine Health Insurance Corporation and that the administration is hoping that the State insurance firm will pay the services of the laboratory to maintain its continuous operation to ensure the immediate release of the swab test results being submitted for confirmation by the laboratory.

The LHRMH official reported the molecular laboratory has an initial one reverse transcription polymerase chain reaction (RT-PCR) machine with 5 trained medical technologists managing its operation once a day to ensure that swab test results of the priority sectors will be released in time to the concerned provincial epidemiology surveillance unit for subsequent release to the health facility where the swab specimens originated.

According to him, LHRMH is awaiting the additional RT-PCR machine from the World Bank through the health department to increase the laboratory’s capacity and speed up the release of the swab test results of the increasing number of specimens being submitted to the laboratory for confirmatory tests.

He pointed out that the operation of the laboratory will remain limited for the priority sectors as identified by the health department while awaiting the additional RT-PCR machine and the increase in the manpower to increase its testing capacity to be able to address the increasing number of specimens being submitted for testing.

Calpito stipulated that specimens from contact tracing, expanded testing and aggressive community testing are immediately referred to the Baguio General Hospital and Medical Center (BGHMC) the designated sub-national testing center in Northern Luzon, and the Ilocos training and Regional Medical Center in San Fernando city, La Union to ensure the timely release of the desired test results because of the limitations of the newly opened laboratory in the hospital premises.

The medical doctor called on the public to continue adhering to the implementation of the prescribed health and safety protocols to prevent them from contracting and subsequently spreading the deadly virus in their communities. By HENT