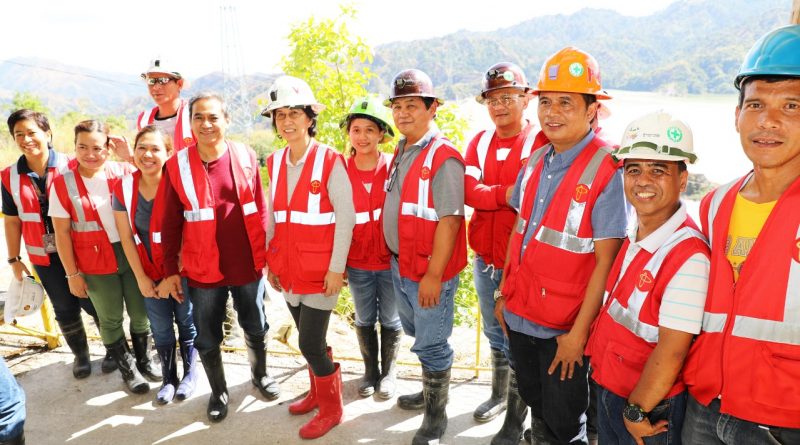 TUBA, Benguet  – Having passed with flying colors a previous technical audit done by government on its operations, Philex Mining Corp. is now the “benchmark” for an “objective, fact-finding, and science-based process” of review to be conducted by an interagency tasked to recommend policies to improve the mining sector.

“It’s not going back to the review, but moving forward,” Gabriel Pamintuan, a consultant for the Development Academy of the Philippines (DAP), said during a visit at Padcal mine, Philex Mining’s gold-and-copper operations in the Benguet towns of Tuba and Itogon.

He expressed this clarification on Sunday, March 4, as part of a five-man team from DAP-a state-run economic development agency tasked by the Mining Industry Coordinating Council (MICC) to review this year the performance of operating mines that visited the Padcal mine camp, and to dispel any idea that there is a technical re-audit to be done.

“The review is intended to be an objective, fact-finding, and science-based process to identify interventions that would effectively address existing mining issues and concerns, and to recommend policy measures that will further improve the management and regulation to ensure the development of a more sustainable and responsible mining sector,” Winnie Manzo, project manager at DAP, said in a letter, dated Feb. 19, to Philex Mining AVP and Padcal Asst. Manager Roy Mangali. “The review shall cover the performance [of] mining companies in the technical, legal, social, environment, and economic aspects.”

Manzo, who was with the five-man team, added in her letter, “Philex Mining is not one of the mining companies to be reviewed in this initial batch. However, we would like to visit your mining site as a benchmark for us.”

“We are sitting on riches here, for example, but outside, many are living in poverty,” said the team leader, Trygve Bolante, who is vice president at DAP, during an exit conference held at the Philex Guest House, in Tuba’s Sitio Padcal, Brgy. Camp 3, following a tour of the Padcal mine camp. “They must know that there are responsible miners. This is setting the benchmark.”

This was echoed by Pamintuan, saying that Philex Mining must conduct a massive information campaign on how it has been carrying out its operations responsibly and conscientiously by helping communities build roads, provide livelihood, and protect the environment; as well as implement other social projects like scholarship grants and free health-care services to its stakeholders, particularly those in the host and neighboring villages.

Eduardo Aratas, manager of the Legal Division at Padcal mine, said in an interview that Philex Mining has ably handled a media and public campaign on the company’s gold-and-copper operations through the Padcal Padcal Mine locally and the Philex Headquarters in Manila, which disseminate press and/or photo releases regularly, as well as via the various company sponsorships of a number of local, regional, and national forums and seminars related to the mining sector.

In its Jan. 5 statement, the Department of Finance (DoF), whose Secretary co-chairs the MICC with the Environment Secretary, said the initial batch up for “ ‘fact-finding and science-based’ review” involved the 26 mine sites “ordered either suspended or shut down” in 2017 by Regina Lopez, formerly the designated environment secretary, who failed to get confirmation from the Commission on Appointments. It added that 25 experts would comprise the five technical review teams (TRTs) tasked to evaluate these 26 mining operations.

The teams’ recommendations, it added, must include mining-related methodologies and procedures to maximize the benefits derived from the mining sector and avoid damages; the list of violations done by miners that are difficult to address by the government regulators alone; and the appropriate penalties to be imposed for such inefficiencies.

“The TRTs are also expected to recommend measures that need to be instituted to avoid the recurrence of such inefficiencies/violations/damages, and to improve mining operations with a view to effectively safeguard the environment and protect the rights of resource-dependent communities,” the DoF said.

Pamintuan said the fact-finding review, which was supposed to start last January but has been delayed due to funding constraints, can start its field work by April, and would be able to come up with a report after two months. He added that MICC has tapped the expertise of the DAP to implement and manage the “objective and scientific fact-finding review of existing mines.”

In August 2016, Philex Mining passed with overwhelming success the mine audit conducted by a team sent over by the Department of Environment and Natural Resources. In an Aug. 15 statement issued by the company, it quoted Eligio Ildefonso, secretariat executive-director of the National Solid Waste Management Commission (NSWMC), as saying in an interview during an exit conference held in Baguio City: “This is it there is no need for a re-audit, as you have not committed any infractions.”

Ildefonso, who led the 14-member delegation that conducted the mine audit at Padcal on Aug. 8 – 10, 2016, said that he and his team were all praises for Philex Mining as they witnessed with awe the social-development projects and environmental-protection programs implemented at its mine site as well as in the host and neighboring communities.

Some Padcal managers also presented before the five-man delegation from DAP on how Philex Mining has been paying its business taxes religiously, and how it has fulfilled its duties by implementing a number of social projects in its outlying communities of Brgy. Camp 3 and Brgy. Ampucao (both host), in Itogon; as well as Brgy. Camp 1 and Brgy. Ansagan, both in Tuba, and Brgy. Dalupirip (all neighboring), in Itogon.

For this year, the company paid in January a total of almost P15 million in LBTs, or local business taxes, to its host municipalities, said Roselyn Dahilan, manager at Padcal’s Finance Group. Done in January, the tax payments were made to Tuba and to Itogon in accordance with the towns’ respective revenue codes.

The MICC-DAP delegation was also informed that Philex Mining has been working toward obtaining a higher International Organization for Standardization ISO 26000, which covers Social Responsibility Guidance Standard. The company is already certified for Integrated Management System (IMS), owing to its successful programs on environmental protection and work safety. It was granted this recognition by TÜV Rheinland, a Germany-based technical services provider, on Apr. 22, 2015. The IMS Certification covers Philex Mining’s environmental management system and safety management, which includes operations in mining, milling, and tailings storage facilities.