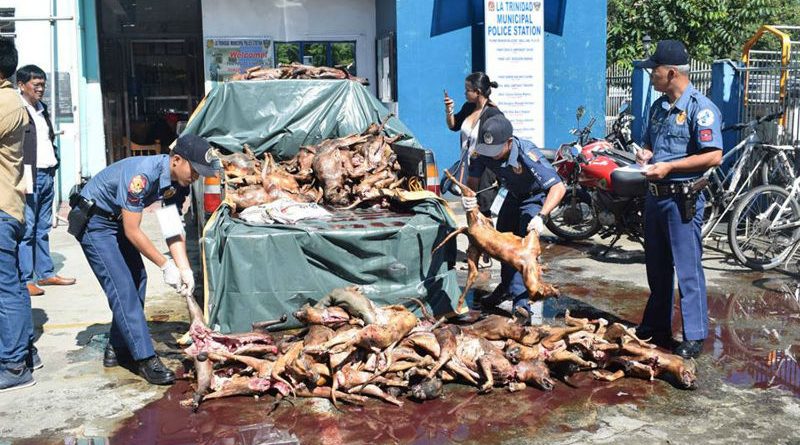 LA TRINIDAD, Benguet – Two persons were arrested by combined police operatives and intelligence agents after discovering the existence of some 49 heads of butchered dogs inside their pickup during a checkpoint operation at Longlong, Puguis, here, Thursday night.

Initial police investigation showed the police operatives were conducting a checkpoint operation in the area when they flagged down a black pick-up bearing license plate number WCR-994.

During the inspection of the vehicle, the law enforcers happened to smell a foul odor emanating from the said vehicle that prompted them to inquire on the contents of the sacks that were loaded on the back portion of the vehicle.

To their surprise, they found out that the said sacks were loaded with 49 heads of butchered dogs from Pangasinan.

The occupants of the vehicle informed the police that the said butchered dogs were entrusted to them by a certain Gerald Acostan from Pangasinan which was supposed to be delivered in the capital town.

The 49 heads of dogs were subsequently turned over to the National Meat Inspection Service – Cordillera for proper disposition in their compound in Green Valley, Baguio City.

This post has already been read 1154 times!It’s a rare sight to see Team Lakay fighters seethe and seemingly lose