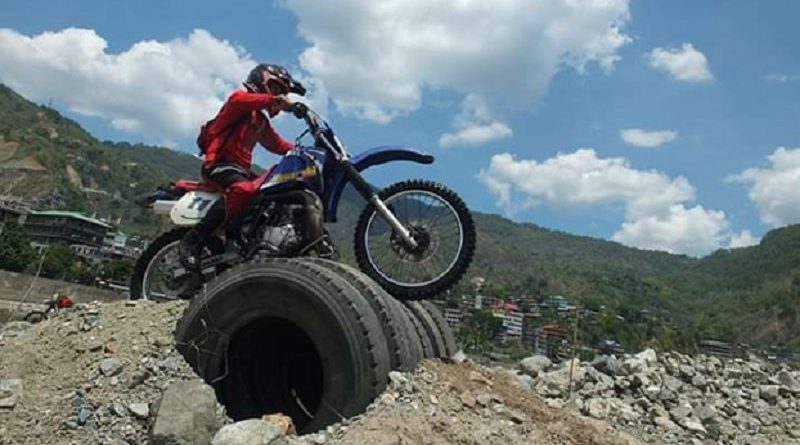 Bontoc – Seventy one motor riders survived the rigorous route of the prestigious endure challenge that was carried out at the Chico river bank of this booming capital town of Mountain Province.

The motor riding enthusiasts came all the way from Buguias, Mankayan, La Trinidad and Itogon, all in Benguet, Baguio City, and Dupax, Nueva Ecija. Some riders from Sagada, Tadian, Bontoc, and Saclit, Sadanga represented Mountain Province.

Under the Local Enduro riding category, Gareth Likigan stalked the champion crown. He was trailed by Donald Kisofen of Tadian as 1st runner up, Ian Fritz Baniaga of Sagada as 2nd runner up, Arman Liwan of Buguias as 3rd runner up, and Stephen Bucasan of Mankayan as 4th runner up;

In the All Bontoc riders group, Alfredo Dogui-is showed his skills that paved him to lead the race, Clayton Sagsakho completed as 1st runner up, Jaybe Batugo as 2nd runner up, and Arnold Joshua Tudlong and Henry Farnican as 3rd runner up and 4th runner up, respectively;

Under the All China motorcycle riders category, the following were declared as winners: Arnold Jushua Tudlong of Bontoc-champion, Julius Cortez, Baguio-1st runner up, Rhey Langagan, Sagada-2nd runner up, Mark Galad, Mankayan-3rd runner up, and Garry Ekid Bontoc-4th runner; and

Jessie Saguipil of La Trinidad controlled the race in the Production and Power Enduro, while Ryan Saguiyod of Baguio finished the race as 1st runner up, James Simongo from Tadian as 2nd runner up, Donald Kisofen,Tadian as 3rd runner, Mark Galad, Mankayan as 4th runner up.
Three special awards were given to Gareth Likigan from Sagada, Clayton Sagsakho from Bontoc and Romeo Yadan from Tadian as the fastest rider, oldest rider and youngest rider, respectively.
The prestigious event was organized by the Mountain Province trail riders group, Mountain Province Riders Club and Bontoc Bull Riders in support to the celebrations of the 52nd Mountain Province Day and 15th Lang-ay Festival.

According to the organizers, they said that the goals of the race were to create responsible motorcycle programs and activities especially for the youths to keep them away from illegal drugs and other bad influences, and to promote motorcycle race as an added tourism activity in Mountain Province.
In an informal talk with some riders, they revealed that the recent motor biking was really challenging but enjoyable. They recommended that same event must include mountain biking as there are more daring routes especially thru the passable Spanish trails.
The organizers of this event are extending their thanks to the members of the administration crew for their unending cooperation and support. This were composed of Krenna Shane Patacsil, Summer Faith Dogui-is, Olive Miranda, Antonette Wandag, and Regina Opana.

Banner photo: Arman Liwan, 3rd runner up of the local enduro category from the famous vegetable bowl of Buguias, Benguet, shows his stunning ascend and jump over some elevated oversized tires. Photo by Gareth Likigan.