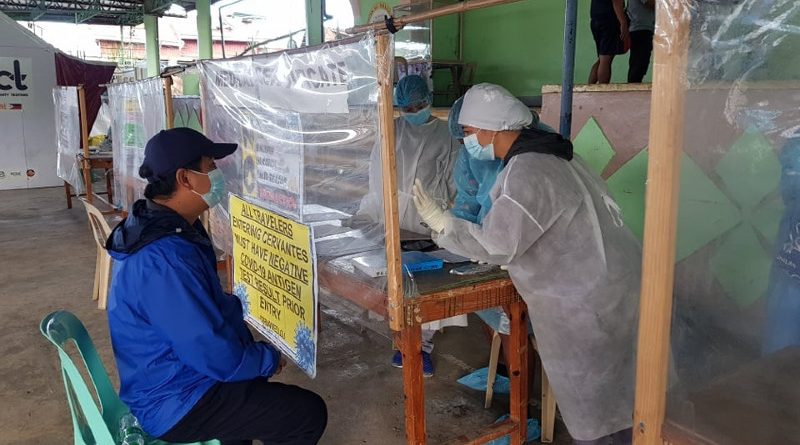 MANKAYAN, Benguet – Some one thousand six hundred seventy-eight individuals from various barangays in the municipality were able to avail of the two-day mass testing that was conducted by the State-owned Bases Conversion and Development Authority (BCDA) in partnership with the provincial and municipal inter-agency task forces held recently.

He claimed that the swab test specimens were immediately transported to the Ilocos Training and Regional Medical Center (ITRMC) based in San Fernando City, La Union for the required tests where results were made available in 48 hours.

Results of the first day of mass testing showed that 51 individuals of the 927 persons who availed of the said test were said to have tested positive for the dreaded Coronavirus Disease 2019 (COVID-19) and were immediately isolated so that they will not further spread the virus in their respective communities.

Ayong disclosed that based on the initial report that was submitted to him by those who conducted the mass testing, 32 individuals of the 376 persons that were tested in barangay Sapid were confirmed to be positive of the virus, 12 individuals out of 357 in Lepanto and 7 persons out of 194 individuals in Poblacion also tested positive for COVID.

Earlier, the BCDA decided to include Mankayan in the areas where to conduct the mass testing following the surge in COVID cases that mostly transpired in the Lepanto mine camp over the past several weeks to ensure that the situation will be placed under control and prevent the further spread of the virus in the municipality that might stress the existing local health care system and overwhelm the available frontliners.

According to him, the existing capacity of the town’s isolation facilities increased to 600 after the regional and provincial offices of the education department approved the earlier request of the municipal inter-agency task force to allow the use of some public elementary and high schools for the said purpose to accommodate the projected increase in the number of COVID cases in the locality because of the results of the mass testing.

He stated that the municipal government had been doing its best to ensure that the COVID patients confined in the isolation facilities being managed by the local government are given utmost attention to address their needs unlike in some facilities that are not under their control where there were complaints that cropped up on the alleged poor management of the Lepanto Consolidated Mining Company.

Mayor Ayong expressed his gratitude to the country’s testing czar Vince Dizon, the officials , personnel and volunteers of the BCDA, the Cordillera office of the Civil Defense (OCD-CAR), the health department and the interior and local government department for their contributions that caused the inclusion of the municipality in the areas where mass testing should be done to ascertain the percentage of the local population infected with the virus.

This post has already been read 525 times!LA TRINIDAD, Benguet –  Benguet Caretaker Congressman and Anti-Crime and Terrorism through Community