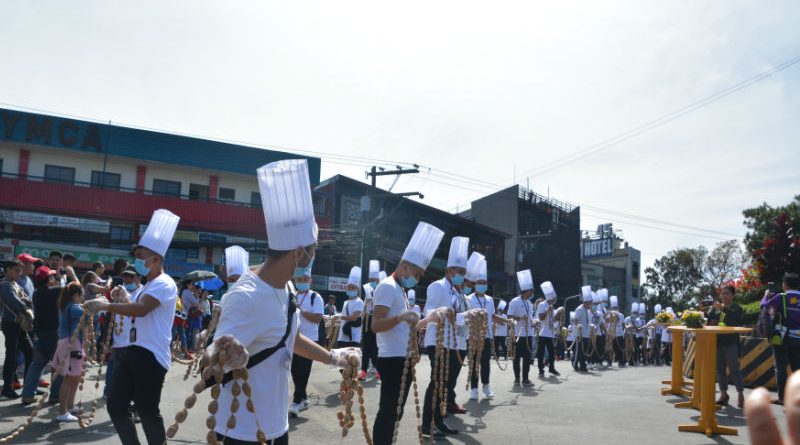 BAGUIO CITY – More than one thousand four hundred students from the different hospitality and tourism management institutions successfully paraded the 7.8-kilometer long Baguio longanisa along the whole stretch of Session Road, the city’s main thoroughfare, to highlight the 15th edition of the Hotel and Rest Tourism HRT Weekend in the city.

Bondalyn Alabanza, proprietor of MB Alabanza Longanisa, said that the record-breaking Longest Baguio Longanisa weighed more than 3,600 kilos and was composed of some 11,950 dozens of the marble-type longanisa, one of the favorite breakfast delicacies in the Summer Capital.

MB ALABANZA Longanisa, the partner of the Hotel and Restaurant Association of Baguio (HRAB) in the presentation of the Longest Baguio Longanisa, took two and a half months to prepare the over 16,000 dozens of longanisa that was supposed to be used to break its earlier record in the parade of the same type of longanisa over six years ago.

“We are elated over the successful presentation of the third edition of the Longest Baguio Longanisa parade to our people and visitors. Our efforts in preparing for such a successful activity really paid of and we hope for future similar partnerships with the HRB and the local government in the future for us to contribute in enticing people to visit our beloved Baguio,” Alabanza stressed.

She disclosed that this year’s longest longanisa was made up of 1,700 kilos of lean pork, 1,300 kilos of pork fat, 300 kilos of Ilocos garlic, 262 kilos of dry spices and 71 liters of wet ingredients.

In 2007, HRAB, in partnership with MB Alabanza Longanisa, was able to present a 3.5-kilometer longanisa that was followed by its second edition in 2013 where over 6 kilometers of longanisa was again presented to the residents and visitors alike.

For the third edition, HRAB was supposedly to present some 7.6 kilometers of longanisa but the same was increased to 7.8625 kilometers.

Deputy Executive Secretary Alberto Bernardo, who represented Executive Secretary Salvador C. Medialdea as guest of speaker during the said event, extended the Palace’s commendation to the government and private sectors for putting things together and being able to present the longest longanisa to help boost the growth of the local tourism industry.

He Underscored that tourism plays a key role in improving economic activities and sources of livelihood in premier tourist destinations in the country that is why private sector-led activities like the Longest Longanisa parade in the city speaks well of the solid partnership of both the government and the private sector in helping sustain the growth of the industry that perks up the local economy.

The Palace official encouraged the local government, concerned government agencies, the private sector and concerned stakeholders to strengthen the partnership that bonded them together for the over one and a half decade of partnership so that they could uncover more crowd drawing events that will improve the growth of the city’s tourism industry in the coming years.

Students from the University of Baguio (UB), University of the Cordilleras (UC), Saint Louis University (SLU), BSBT College, SKD Academy, Chefs Academy, Easter School and Philippine Womens’ University actively participated in the successful staging of the presentation of the Longest Baguio longanisa that served as this year’s attraction for the HRT Weekend.