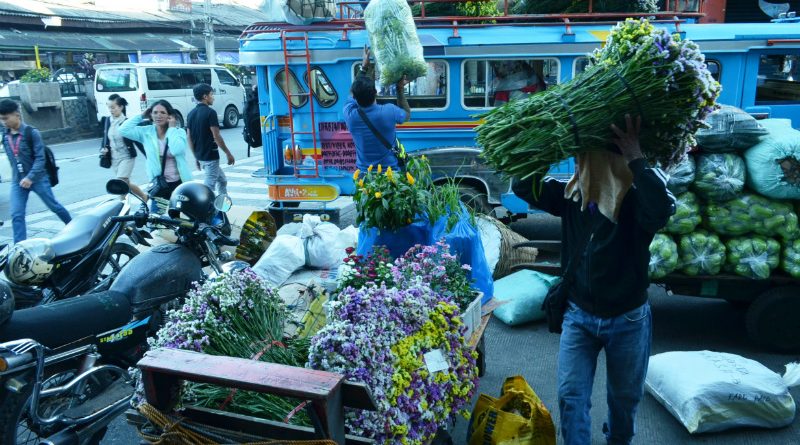 LA TRINIDAD, Benguet – Some one hundred twenty cutflower and candle vendors started vending their products in designated stalls at the Km. 5 parking area in time for the two-week commemoration of All Saint’s Day in the municipality.

Mayor Romeo K. Salda said that the cutflower vendors allowed to vend in the aforesaid area from October 15-28, 20220 are bonafide members of the La Trinidad Cutflower Growers Association (LTCGA).

He claimed that the decision to allow the cutflower and candle vendors to sell flowers and candles in the designated vending area is part of the initiative of the municipal government to allow the heavily impacted flower vendors to earn income from the sale of their produce at affordable prices.

Andy Colti, president of the LTCGA, said that the local flower growers produced sufficient supply in time for the commemoration of All Saint’s Day.

He disclosed that the flower vendors will open their stalls around 8 am and will close depending on the presence of people buying flowers and candles although they will adhere to the implementation of the curfew hours in the municipality.

According to him, their operation could extend depending on the presence of people wanting to buy flowers and candles during the two weeks allowed by the municipal government for residents to visit their departed love ones who had been buried in the various cemeteries in the municipality.

Earlier, the inter-agency task force on the management of emerging and re-emerging infectious diseases ordered the closure of all cemeteries in the country from October 29 to November 4, 2020 to prevent people from crowding therein.

Mayor Salda urged the residents to patronize the produce of the local cutflower growers to allow them to recover from their losses when they were not able to sell the flowers during the cancelled graduation rites and other important crowd-drawing activities when the enhanced community quarantine was strictly enforced in most parts of the country.

The municipal mayor expressed his gratitude to the members of the municipal council headed by Vice Mayor Roderick Awingan for approving the use of the Km. 5 parking area as the site where cutflower growers could sell their produce.

Salda explained that because of the IATF decision to close the cemeteries from October 29 to November 4, 2020, the municipal government deemed it important to open private and public cemeteries earlier for residents to pay their respect to their departed love ones. By HENT

This post has already been read 175 times!TABUK CITY, Kalinga – With the voter’s registration extended, the Commission on Elections