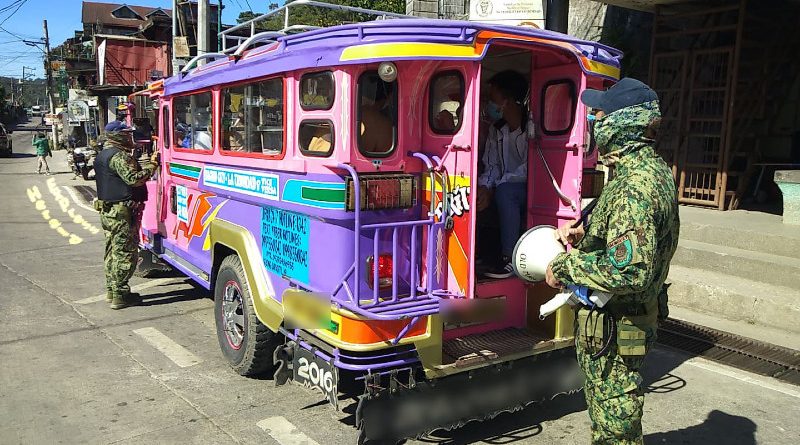 LA TRINIDAD, Benguet– More than one thousand individuals were arrested by combined police operatives and volunteers for their alleged blatant violation of the ongoing implementation of the minimum public health standards to contain the rapid spread of the dreaded Coronavirus Disease 2019 (COVID-19) and cause another uncontrolled surge in the number of cases in the municipality.

Mayor Romeo K. Salda stated that the local government does not want to impose fines and penalties against the violators of the basic health and safety protocols that are being implemented but it seems that people who are allowed to go out of their homes are complacent as if the situation already normalized.

Earlier, the municipal council approved an ordinance imposing penalties for violators that will be apprehended because of their failure to ware face masks and shields in the municipality.

Mayor Salda claimed that people should learn to protect themselves by ensuring that they always wear their face masks and shields to prevent them from contracting the deadly virus which might compromise their health condition and cause the local health care system from being compromised and frontliners from being stressed.

He pointed out that concerned government agencies and local governments are working double time just to ensure the significant reduction in the number of COVID cases being recorded in the different parts of the country and what is being requested from the residents is just to comply with the implementation of the minimum public health standards such as the mandatory wearing of face masks and shields, the observance of physical distancing, the practice of personal hygiene and regular disinfection which is still the best weapon to prevent them from being infected with the virus.

According to him, the fight against the pandemic will not be successful without the utmost cooperation of the people to the implementation of the basic health and safety protocols as the same were not designed to make it hard for them but instead to protect them from being infected with the virus so that their existing health condition, especially if they have co-morbidities, will not be further compromised and aggravated that could cause their situation to worsen.

The mayor admitted that the existing health facilities and isolation units were nearly overwhelmed when there was a surge in the number of COVID cases not only in the capital town but also in other nearby municipalities, including Baguio city, that is why local officials were compelled to make the appropriate adjustments in the implementation of minimum public health standards that contributed in the gradual reduction of cases until the situation stabilized recently.

He asserted that even with the ongoing implementation of the government’s mass vaccination program is not a guarantee that individuals could be spared from the virus as what is evident is people that are vaccinated will be spared from contracting severe pneumonia, thus, it is still important for them to avail of the available vaccines to help in achieving herd immunity that will pave the way for the gradual and safe revival of the overall economy that had been impacted following the implementation of the various levels of community quarantine for over a year now.

This post has already been read 843 times!The city is not yet inclined to open inter-regional public transportation to avoid