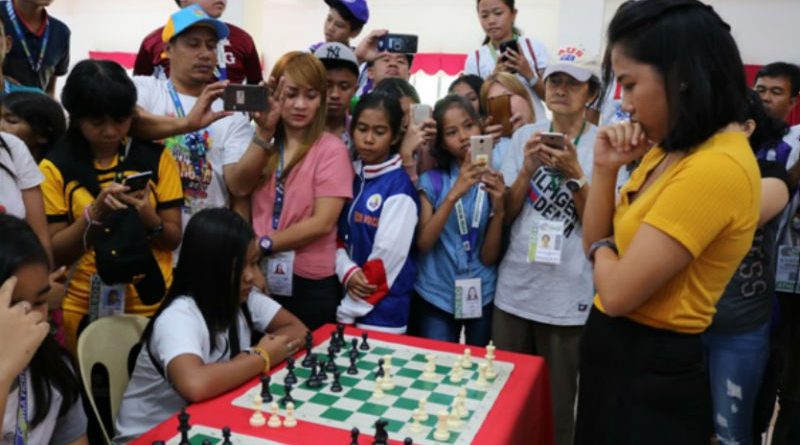 A day before the formal opening of the 2019 Palarong Pambansa, DepED has devised a program dubbed as “Sports Heroes Day” to motivate all athletes in their respective events and gave them opportunity to meet in person their sports hero.

For chess, it was WGM Frayna, the latest chess sensation and icon of the country who gave inspiring message and steered the chess players to keep on playing and to never give up in reaching their dreams.

“Pumunta rin ako sa Palarong Pambansa tulad niyo ng ilang beses pero hindi ako nanalo, hindi ako nagkamedal (I also went to Palarong Pambansa several times like you but I did not win, I did not get any medal) but I never stopped. I worked hard,” Frayna narrated before the crowd of about 250 including those who are in an arbiter’s seminar being conducted by International Arbiter James Infiesto.

Frayna said she has consistently shown diligence during training and did her best in every opportunity she had way back then until she has found her rhythm in playing chess. “Sabi nila walang patutunguhan ang chess, pero hindi ko pinakinggan iyon kundi nagpursige ako hanggang sa maabot ko ang mga pangarap ko,” Frayna added.

After her message and to the delight of the crowd, she played against six selected elementary players in a simultaneous chess exhibition. She displayed her mastery in the opening as she did not stay too long to make a move in each board.

It was Apayao rising star elementary player Darlene Dannog who represented Cordillera Administrative Region in the exhibition game. As black, Dannog showed her solid play against Frayna as they reached the middle game with a balance position though Frayna had more active pieces. However, all games were discontinued due to the commitment of Frayna’s schedule and also to other Palarong Pambansa activities.

The players, coaches and chess enthusiasts had been given the chance to shake hands with Frayna and took picture with her. Frayna is now enjoying the fruit of her labor as regular Philippine National Team member and in many occasions represented the country in international chess competitions like the Chess Olympiad.