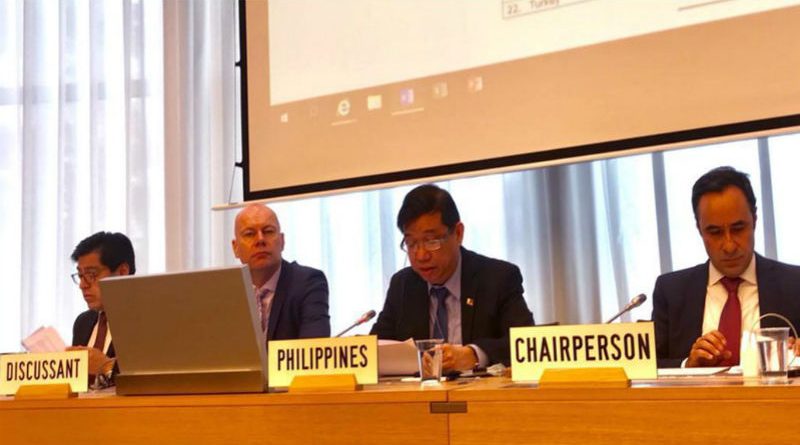 Member  economies  of  the  World  Trade  Organization  (WTO)  praised  the Philippines’ economic performance as it completes its 5th Trade Policy Review in the World Trade Organization on 26 and 28 March 2018 in Geneva, Switzerland. The Review evaluates the country’s trade policy regime from 2012 to 2017.

DTI Undersecretary Ceferino S.  Rodolfo  headed  the  Philippine  delegation, with Undersecretary  for  International  Economic  Relations  and  Philippine  Ambassador-Designate  to  the  WTO  Manuel  A.J.  Teehankee heading the DFA contingent. Undersecretary Rodolfo highlighted the Philippines economic  performance  during the review period and the government’s initiatives that were designed to achieve the goals of zero poverty and inclusive growth and to deepen policy reforms that ensure a more open economy, and an enabling business environment, devoid of any red tape. He also emphasized  the  work  done  by  the  country  on  its  MSME  advocacies  and  FTA engagements.

Ambassador Juan Carlos  Gonzales,  Colombia’s  Permanent  Representative  and Chairperson of the Trade Policy Review Body of the WTO, recognized that the Review offered an excellent opportunity for other WTO Members to deepen their understanding of the trade, economic, and investment policies of the Philippines, pointing out that more than 330 questions from 22 Members were submitted to the Philippines during the review process. Ambassador Gonzales noted that:  Members  praised  the  Philippines  for  its strong  commitment  to  preserve  and  strengthen the  multilateral  trading  system,  and  its active  role  to  advance  the  negotiations  in  areas such  as  fisheries  subsidies, …Micro, Small and Medium Enterprises (MSMEs).

Other critical reforms that were pursued in the country during the Review period includes the Customs Modernization and Tariff Act, the Philippine Competition Act and the creation of  the Philippine  Competition  Commission,  the  liberalization  of  several  key  economic sectors, the  amendment of the Cabotage Principle of  the  1957  Tariff  and Customs  Code  through the  Foreign  Ships  Co-Loading Act, the lowering of  tariff  duties on IT-related  products, the amendments to the Intellectual Property Code,  and Project Repeal.”

Ambassador Stephen de Boer, Canada’s Permanent Representative and the Discussant during the Review, complimented the great steps undertaken by the country during the review period. He lauded the Philippines’ commitment to institutions (such as APEC,  ASEAN,  and  the  WTO)  and  commended  the  country’s  strong  economic performance over the last few years. He also advised the Government to further liberalize its policies in foreign direct investments and government procurement.

The  Trade  Policy  Review  acts  as  the  WTO’s  mechanism  to  better  understand  each Member’s trade and economic policies, and serves as a platform to openly discuss and share  each  Member’s  respective  successes  and  challenges.  Delegates  from  WTO economies  recommended  further  liberalization  of the  entry  of investments  in  the Philippines, especially in the foreign entities’ participation in the country’s “Build, Build, Build” program.