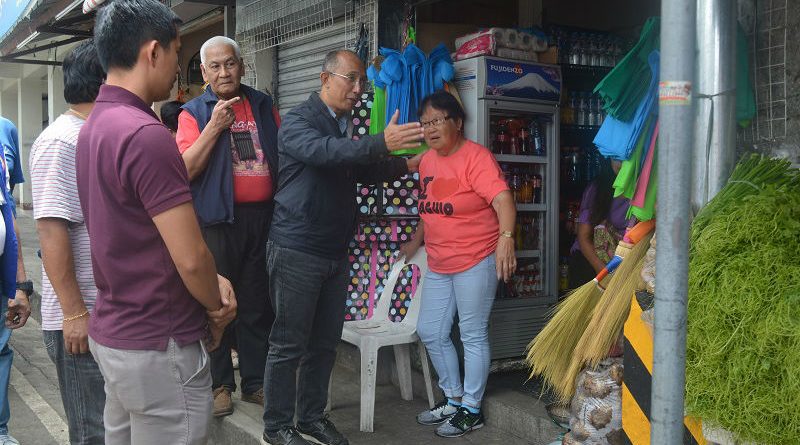 BAGUIO CITY – Mayor Benjamin B. Magalong asserted the need to have order among all stakeholders along Gov. Pack road to ensure the smooth flow of vehicular traffic and guarantee the safety of pedestrians using one of the city’s main thoroughfare.

During a meeting with Session Road-Gov. Pack Road barangay officials, bus and van operators that was followed by an ocular inspection of the area, the local chief executive gave bus companies without the required garage area to have their own garage within a period of one and a half months while obstructions along the road and sidewalks must be immediately removed.

Further, establishments that have extended along the sidewalks must immediately remove such extensions aside from the fact that the treasury booth which is being used by a bus company as its ticketing and booking booth must be removed within one month and for the concerned bus company to find a separate booth.

The mayor required all bus companies and van associations to install standard and uniform signages in their designated booths and parking areas for easy identification apart from the fact that traffic signages that will be installed should be compliant to international standards.

“Bus and van operators should understand that what has been given them to use portions of the road as loading areas is simply a privilege which could the local government could withdraw anytime,” Magalong stressed.

He expressed his gratitude to some bus companies for giving up some of their slots to accommodate other buses whose slots were cancelled and for the cooperation of van operators to be situated in one area to ensure proper order in the area.

On the other hand, taxis will only be allowed on a drop and go situation in designated taxi stands wherein the said scheme will be implemented in an experimental basis while the route of the buses will follow the existing one wherein the buses will have to pass through Upper Session road which will be subject to evaluation by traffic personnel of the Baguio City Police Office.

According to him, bus and van operators must ensure cleanliness at all times in the areas where they are situated so as not to inconvenience passengers and people passing through the area.

Bus and van operators assured Mayor Magalong of their utmost cooperation to whatever initiatives that will be implemented by the local government in the said terminal to help ease the daily traffic congestions and lessen the exposure of pedestrians to unnecessary incidents that pose a serious threat to their safety while walking along the road.

The consultation and inspection conducted by the mayor was through the initiative of the BCPO led by Co. Allen Rae Co and traffic management branch Chief Maj. Oliver Panabang.