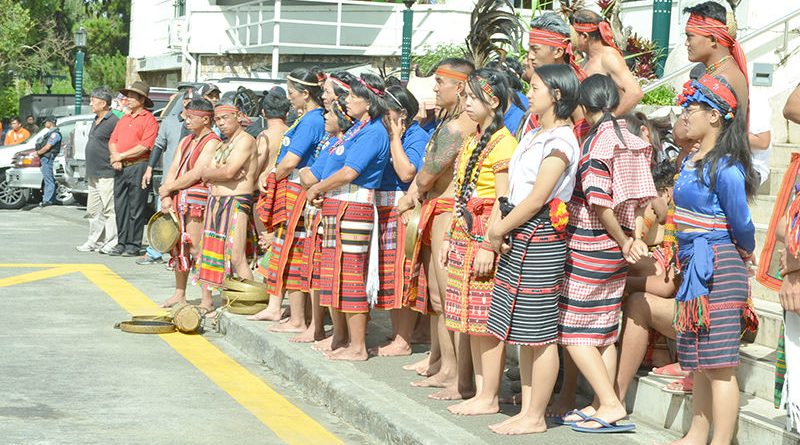 BONTOC, Mountain Province – Some 16 delegates from the province participated in the 1st Indigenous Peoples (IP) Luzon Convergence Summit at the Philippine International Convention Center (PICC) in Pasay City on July 4-6, 2018.

Led by Board Member Tomas Tawagen, the small contingent composed mainly of Indigenous Peoples Mandatory Representatives (IPMRs) joined other IPs from regions 1, 2, 3, 4, 5 and the Cordillera Administrative Region in resolving issues and concerns of the indigenous peoples.

The participants in the summit were welcomed by Mayor Antonino Calixto of Pasay City who has reaped praises for generously waiving the hire for the venue which amount accordingly to P2 million pesos.

Presentations and discussions on IP concerns were done while best practices of IPMRS were presented for the emulation of the other IPMRs for the good of their constituents.

Messages from some government functionaries were also voiced out in support of the IPs. Among those who personally expressed their messages were Department of Justice Assistant Secretary Cheryl Daytec – Yangot on Legal Pluralism, and other line agency representatives.

Some 56 Line Agencies and government offices lend support to the advocacies being peddled for IPs even stating their programs and services.

Engr. Andrew Magwilang, a staff of the NCIP-Mtn. Province, cautioned that some of the programs of the agencies are still with factors to consider that are facilitating or hindering the implementations.

He informed this writer that several resolutions were passed in the summit. Among them are the resolution requesting that the rights of the indigenous peoples will be provided in the Federal Constitution to be formed.

Another is a resolution requesting the President Duterte to direct the Department of Budget and Management (DBM) to allocate mandatory salaries of IPMRS. For the province some receive salaries as other councilors but half of the IPMRs in the province receive only honoraria.

Magwilang further said that another resolution calls for the return of the funds for the Philippine ethnography profiling of IPs in the amount of more than P200 million pesos.

Jaime “Tigan-o” Dugao, the IPMR of Sagada who was present at the summit, expressed optimism that “whatever the output the national government should consider and give focus to”.

Among those who were part of the contingent are IPMR John Challoy of Barlig, the IPMR of Bauko, IPMR Jimmy Galingan of Sadanga and others. Vice Mayor Joseph Apopot of Sadanga and this writer were also present.