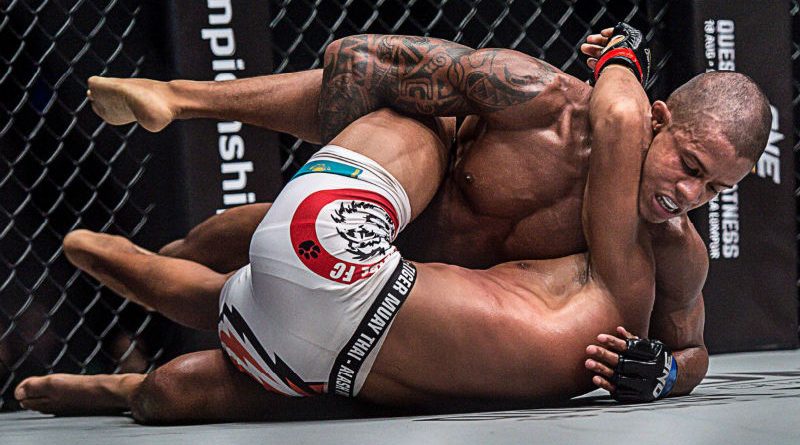 Although he is embarking on an impressive four-bout winning streak, which includes unifying and defending the ONE Flyweight World Championship, Adriano “Mikinho” Moraes prepares for what he perceives as the most difficult title defense of his second reign as the division’s kingpin.

The 29-year-old Brazilian champion is slated to put his coveted gold-plated strap on the line against interim flyweight titleholder Geje Eustaquio of the Philippines in the co-main event of ONE: Pinnacle of Power, which takes place at the Studio City Event Center in Macau, China on June 23.

Moraes may be riding a wave of momentum after defeating Kairat Akhmetov and Danny Kingad to cap off his 2017 campaign, but underestimating a familiar foe like Eustaquio could result to a big blunder.

“Geje Eustaquio has earned the highest level of my respect. If anything, there is no chance of me underestimating him. That would be unwise. We’ve all seen his improvement as a martial artist,” he said.

Both men stood opposite each other for the first time in September 2014 when the two collided for the inaugural ONE Flyweight World Championship.

Moraes derailed Eustaquio’s championship aspirations as he found a way to counteract his opponent’s striking prowess in the second round and then forced the Team Lakay dynamo to wave the white flag with a guillotine choke.

Ever since their initial encounter nearly four year ago, Moraes and Eustaquio have gone from success to success.

Against Eustaquio, Moraes stressed that he will be gearing up for the best version of his Filipino counterpart.

Eustaquio is coming off a title-clinching performance, defeating Akhmetov via unanimous decision in a rematch for the ONE Interim Flyweight World Championship last January.

Moraes was at cageside when Eustaquio toppled Akhmetov, noticing the evident evolution of the 29-year-old Baguio City native from a pure striker to an all-around competitor.

In his cage encounter with Akhmetov, Eustaquio displayed on-point sprawls and his ability to sinuously execute sweeps and guards, as well as his sturdy top control on the mat.

“I’ve seen many of his fights, including his last one in Manila against Kairat Akhmetov. He’s more of a striker, but he has picked up his game remarkably. He is a different fighter now. That makes him so dangerous,” he stated.

Eustaquio may have exhibited a new facet of his growing skillset that could pose a problem to the Brazilian combatant, but Moraes seems not worried about it as he sees himself as a different mixed martial arts competitor as well.

“I’m not looking past Geje,” he declared. “Every fight is different, and each fighter has his or her strengths and weaknesses. We’ve expanded our skills since the last time we fought each other. He will come in prepared, but one thing is for sure: I will have my hand raised.”

Heavily reliant on his specialization in the grappling department, Moraes has won three of his last four matches by way of submission.

Although Eustaquio appears to have the upper hand in the striking arena due to his Wushu pedigree, Moraes has no qualms when it comes to trading kicks and punches with the Team Lakay representative.

“I know he is a good and technical striker. He was able to show off in his last fight that he now has grappling techniques. Things have changed for him. The same goes with me,” he pointed out.

“I believe that I can stand and bang with the best in the world. With that being said, anywhere I can get the finish. Whether it’s standing or grappling, I’m taking it,” Moraes assured.

Moraes expects that Eustaquio will dig deep to score the improbable upset victory over him, but the proud Brazilian remains optimistic that he will still walk out with the ONE Flyweight World Championship around his waist.

“Geje Eustaquio is hungry. He will bring something new to the table in our rematch, but I am confident in my abilities. I see myself retaining my championship on 23rd of June,” he concluded.