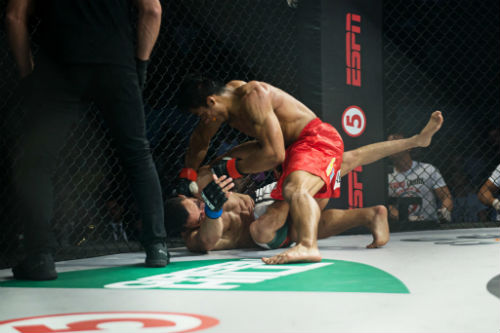 Team Lakay’s Stephen Loman displayed the best of “The Sniper” on and off the cage in retaining his Brave Combat Federation title during his Philippine debut under the promotion.

In what was supposed to be his grand first local fight appearance after winning the Brave Bantamweight title and defending it twice, all in foreign soil, a family tragedy put a damper on the champion’s mode and threatened to take away his focus on the task at hand.

Loman, however, remained focused and displayed what a classy champion he is in the face of this tragedy while proceeding to knock out challenger Elias “Smile” Boudegzdame of France during Brave 22: Storm of Warriors at the SM Mall of Asia Arena last March 15, 2019 to become the first Brave Champion to successfully defend his title thrice.

About a week prior to the match, as Loman was wrapping up his training camp in preparing for his title defense, one of Loman’s uncles who, according to Brave, was one of his biggest supporters and was looking forward to watching him as a member of the live audience, passed away after falling victim of a hit and run incident.

The champ did not let the incident affect him as visibly displayed during the progression of the championship bout.

Round one started with a stand up stance by both fighters, with Loman, the better striker, clearly taking the advantage in the exchanges. Boudegzdame connected on a right straight that had Loman off balanced and sets him to have the Champion’s back.

Loman, however, defends any submission attempt from the awkward position, get the challenger, a submission specialist, off and had the referee separating both men. The stand up battle ensues until the bell rang.

Round two begins the same with the stand up exchanges and Loman defending against the fight going to the mat. An opening for a reversal presented itself and Loman took advantage to bring the fight below while gaining superior pisition and rain ground and pound until the bell sounds.

Loman opened round three with combinations in the early moments then coasted along while superbly defending against Boudegzdame’s repeated takedown attempts before closing the round by connecting various kicks.

Boudegzdame got the upper hand early in the fourth round by catching Loman’s leg but fails to prosper it to a takedown. Both men lock arms to grapple for superior position but nothing much happens until the referee separates both men.

Loman quickly pounces back to action upon resumption until he saw an opening to sneak a left upper cut that missed but set a left cross follow-up that connects and finally send a groggy Boudegzdame to the mat.

The Champion quickly follows to rain elbows and punches against the defenseless challenger.

As the end becomes nearly apparent, Loman displayed one of the classy acts a combat athlete could make, one already made by a Filipino icon, laying off the punishment on the opponent when he thinks the fight is already over.

Reminiscent to what Manny Pacquiao did in his fight against Antonio Margarito, Loman, now raining blows on Boudegzdame, turns to the referee and begs him to stop the fight as the only possible succeeding sequence would be him pummeling a hapless Frenchman on the mat.

The referee, after a few more hits connected, quickly agrees in this case and officially stops the fight at the 4:59 mark of the fourth.

Loman improves his career fight record to 13-2 with the win while dropping Boudegzdame to 15-6.

Loman won the belt during the inaugural Brave CF Bantamweight Champion on November 17, 2017 by knocking out Gary “Saint Lion” Mangat in Ireland

Meanwhile, five other Filipinos emerged victorious in the nine-bout event.

Team Lakay’s Jeremy “The Juggernaut” Pacatiw submitted Mark “The Ruthless” Alcoba in an All-Filipino Main Card bout via an armbar at the 3:06 mark of the third round.

Rolando Gabriel “Dy Incredible” Dy got to display his “Connor McGregor Swag Walk” by knocking out cold Mehmosh “The Renegade” Raza of Pakistan at the 4:04 mark of Round One during their featherweight Main Card bout.

Team Lakay’s Harold “The Artist” Banario registered the quickest finish of the night and the gym’s third submission overall as he defeated Ariel “The Lady Boxer” Oliveros by a Round One submission. The end came via a kneebar with barely 41 seconds gone in the first round of this All-Filipino bout.

Another Team Lakay member, Jomar Pa-ac, opened the night for the host with a lopsided unanimous victory over Satya Behuria of India. All three judges scored the fight 30-27 for Pa-ac in this Flyweight bout.

Last on the list of winners is Jayson “Oragon” Margallo who outpointed Rex “T-Rex” de Lara via a unanimous decision in an All-Filipino bantamweight bout.

John “The Trouble” Brewin of New Zealand outlasted Cian “The Warrior” Cowley of Ireland via a split decision in lightweight co-main card.