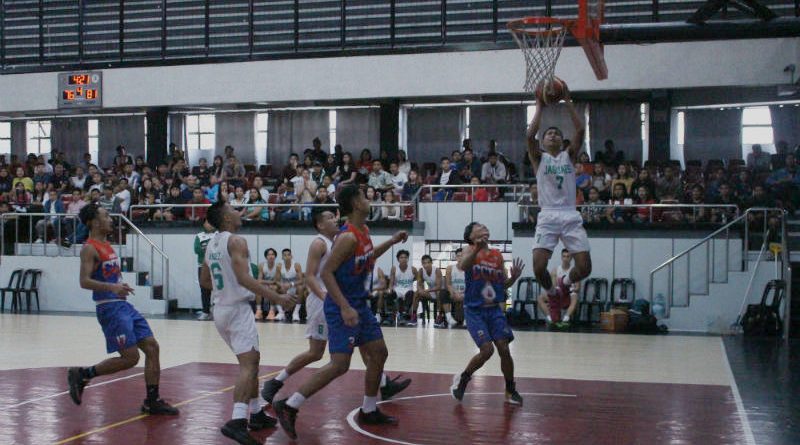 The UC Jaguars pounded the Baguio Central University (BCU) Eagles, 107-89, to secure twice to beat advantage in the semis while their counterparts, the Lady Jaguars, punctuated their dominance in the women’s tournament with a blowout win over the SLU Lady Navigators, 81-28, and automatically claim this year’s crown.

On the other hand, the Atoms compounded the woes of the Navigators as they dealt them a third straight spanking, 72-56, and eliminated SLU from further contention.

The Jaguars ended their eliminations campaign with a 6-2 record, enough to mathematically eliminate the Cordillera Career Development College (CCDC) from contending for a top two seed, even with one more bearing game still to be played.

Meanwhile, the Atoms’ victory allowed them to tie their victims at 5-3 and claim the much coveted quotient advantage. By also winning against the Admirals, the Atoms bagged third seed in the semis.

The Navigators, by virtue of their previous loss to the Admirals, the other team that could possibly join them at 5-3,  officially, and unusually, bowed out of contention from a semis slot.

The University of Baguio (UB) Cardinals currently leads the standings with a 7-0 card and is assured of at least a top seeding in the semis even if they will lose their last game.

The CCDC Admirals will host the Cardinals on November 5 to settle once and for all, which semis format would be used.

A Cardinals win will create a scenario similar to what the Ateneo Blue Eagles are in this year’s UAAP and the San Beda Red Lions in the NCAA. UB would leap all the way to the finals, leaving the Jaguars, Atoms, and Admirals toi dispute the other slot in a ladder format.

The Atoms and the Admirals will first square off in a rubber match. The winner will then advance to face the Jaguars, who will possess twice-to-beat advantage in the series.

If the Admirals win, the semis will be in its usual 1-vs-4, 2-vs-3 format. Top seed UB will face fourth seed BCT in one series. Second seed UC will face third seed CCDC in the other. Both higher seeds will have twice-to-beat advantage.

Meanwhile, the Lady Jaguars were virtually unchallenged by the other three participating teams this year to romp away this year’s ladies championship.

The undefeated Lady Jaguars won all their six games by a beating, averaging 37.5 points winning margin, the 53-point winning margin against the Lady Navs the highest.

Proof that this dominance was more about the Lady Jags, and not their opponents, was confirmed by their decisive routs over the other two participants, a 50-point shellacking of the Philippine Military Academy (PMA) Lady Cavaliers on October 19 and a 43-point pounding of the Lady Cardinals on October 12.

By: Armando M. Bolislis
Photo: The Jaguars’ Chester Elefante attempts this alley-oop during their game against the Admirals last October 20.