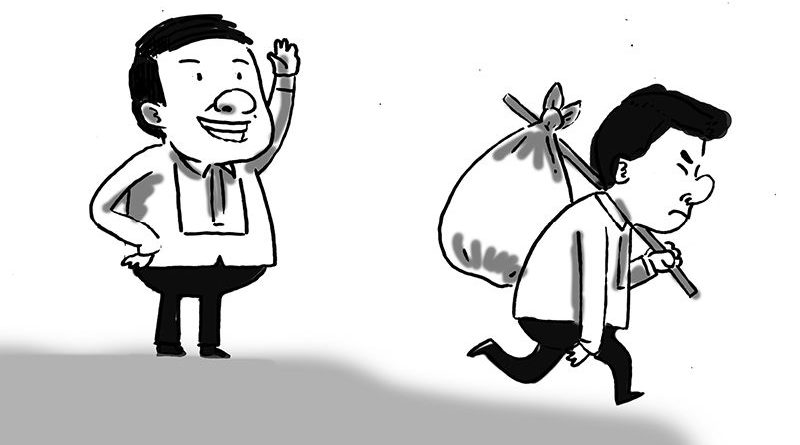 The 1987 Philippine Constitution mandates that all elected officials will have a 3-year  term that will expire every noon of June 3 every after 3 years wherein they are allowed  to have a maximum of 3 consecutive terms. Proclaimed winners during the May 13, 2019 mid-term elections will have to assume their positions by noon of June 30 while those who lost their bid to be elected or those who have completed their 3 terms in office will have to relinquish their positions to the ones who were given the mandate by the voters.

Today, thousands of re-elected and elected officials will be taking their respective oaths of office and assume the positions where they were voted upon by the people while thousands will be leaving their offices and embrace private lives in preparation for their future political or whatever plans that they will take in the coming months.

For those who will be leaving their current positions, you were able to accomplish significant programs, projects and activities during your ensure in your offices that contributed in elevating your locality to its present status. It is unfair for some self-styled people to claim that you never contributed to the development of your locality during your term of office. Irregardless of whatever your performances were, it is still evident that much have accomplished that helped in improving the state of every locality not only in the region but also in the whole country. People who claim to be analysts and critics but refuse to open their eyes to realities in their localities and the global village as a whole does not speak well of their sound judgement of what is right and wrong. Obviously, the render negative views and criticize primarily because of certain considerations for the aggrandizement of their benefactors. These are the people who refuse to go down to the grassroots level and experience the daily difficulties of life living in extreme poverty while they enjoy doing their thing in their comfort zones.

On the other hand, for those who are newcomers in the political arena, it is time to walk the talk or hit the ground going. Neophyte leaders should start their career in public service with a clear statement to prove that everyone is worthy of the position that they were voted upon. The first days of our new leaders will be a critical stage to gauge on whether they made a mistake into being dragged into a snake pit or pushed to their comfort zones to prove that even if they’re now in politics, they can make difference at the earliest possible time. Aside from new leaders, there are many new good men Fridays entering government that is why the first weeks of July will surely be a period of adjustment for everyone and even the electorate considering the new infusions in the existing systems of serving the needs of the people.

What currently prevails in all local governments and concerned government agencies around the country is a wait and see attitude while others need not to adjust that much because those who were elected into office are familiar with the prevailing situation in their localities and that they have already short, medium and long-term solutions that are in place.

We really need the support of everyone for us to succeed in whatever are our endavors. Constructive criticism on the way our leaders govern us are very much welcome because no one as the monopoly of knowledge in finding solutions to our everyday problems. We need to listen to each other’s thoughts and ponder on the same before deciding on what close to accurate solution to embrace either it is popular or unpopular. Payment of political debts is one of the worst things that could happen in our locality considering that most elected leaders seem to be tied up to their benefactors when deciding on certain issues and concerns that need firm decisions. May our leaders be comfortable in handing decisions on what will be for the greater majority of our populace and not for the benefit of their supporters and those people who were instrumental in bringing them to power. We certainly agree that politics is one of the dirtiest game because politicians can sacrifice everything, including their honor and integrity, for them to gain the support of influential sectors. Worse is that their decisions are aligned with the positions of their financiers or those whom they have the debt of gratitude without looking to the greater horizon on who really brought them to power which are the ordinary voters themselves.

If we owe a debt of gratitude, we owe it to our voters that is why our newly installed leaders should work for the welfare of everyone in their locality. Let us not  be blinded by the interest individuals and groups that surround us but instead let us do what is right and it will be gain the people who will judge us if we were able to perform well without material consideration unlike what happened in the recently conclude political exercise in the country.

We can only wish our leaders who will be leaving public office the best of luck in your future endavor and whatever political plans in the future. We also wish our new leaders to start working and proving to the voters their true worth because 3 years is a very short period of time.