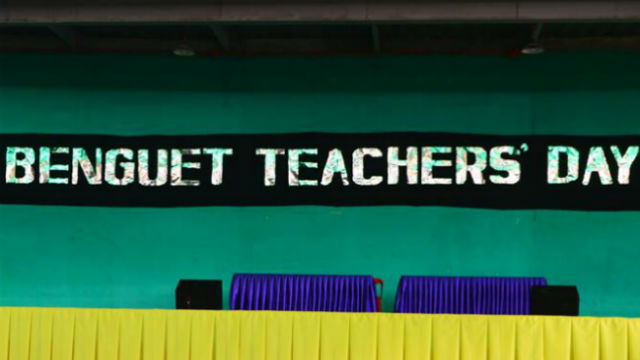 The Province of Benguet is set to reprise the celebration of Teacher’s Day on September 26 and 27, 2019 with the set of events highlighted by a parade and an IPED Summit.

Also included in the activities are a search for Model Teacher and sportsfest that included both traditional sporting events and Indigenous Games like Kadang-Kadang Relay, Tug of War, Jajaking (Salikawkaw), Bunong Braso, Pinikpikan, and Pounding of Rice.

Part of the provisions of the ordinance also declares classes in all levels in all schools, colleges, and universities, including technical vocational schools and community learning centers suspended in the entire province.

According to Provincial Ordinance No. 15-17C, the Benguet Teachers Day aims to provide a venue for the active participation of teachers in the province in the celebration of national teachers month and to conduct activities which will make teachers feel the importance of their role in nurturing the students to become responsible citizens in the province.

It also aims to give recognition and awards to qualified teachers for their length of service, exemplary achievements and outstanding performance.

Meanwhile, Benguet Vice Governor Atty. Johnny Waguis, one of the authors of the ordinance while serving as a Board Member of the province, said the provincial celebration  is in line with United Nations Education, Scientific, and Cultural (UNESCO) and the Philippines’ designation of a period for recognition of teachers.

UNESCO designated October 5 of every year as “World Teacher’s Day” where the central role that teachers play in guiding the children, youth, and adults through life-long process is celebrated.

On the other hand, Proclamation No. 242 by then Philippine President Benigno Simeon C. Aquino III declared September 5 to October 5 of every year as “National Teacher’s Month” in the Philippines where the occasion can be used to celebrate the unique role and service that teachers play in guiding families, strengthening communities, and building the nation.

Waguis said Benguet currently has around 5,000 teachers serving the students of the province.

Benguet officials led by Representative Nestor Fongwan, Sr. and Governor Melchor Diclas are expected to grace the program where awarding of winners of the different competitions and giving of the recognitions are to take place.