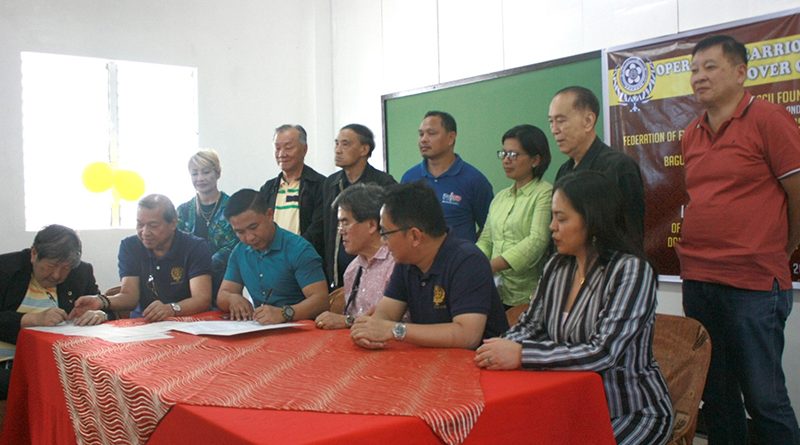 BAGUIO CITY  – The Federation of Filipino-Chinese Chamber of Commerce and Industry (FFCCCI) and the Baguio Filipino-Chinese Chamber of Commerce and Industry (BFCCCI) formally turned two newly constructed school buildings over to the concerned stakeholders of two public schools in the different parts of the city to help provide additional classrooms for the increasing student population in the said schools.

BFCCCI president Peter Ng of Hotel Supreme said that the funds for the construction of the two school buildings were sourced from both the federation and the local chapters of the organization under its Operation Barrio School program geared towards providing the needed assistance to public schools that are in need of help for the put up of additional classrooms that will cater to the increasing student population in their schools.

The blackboards and dividers for the new classrooms in the Lucban Elementary School was provided by Mr. Ng through the BFCCCI while the desks of the pupils will be provided by the school through their prospective donors and the other civic groups interested to help in improving the quality of education in the city.

On the other hand, the chairs, blackboards and dividers for the classrooms in the new school building of the Dontogan elementary School were realized through the combined efforts of the BFCCCI through Mr. Ng and Alex Sia and the Filipino-Chinese Amity Club of Baguio headed by Thomas Kho.

Concerned barangay officials, school principals of the two schools, officers of the Parents-Teachers-Community Association (PTA) of both schools and pupils expressed their sincerest gratitude to the FFCCCI and the BFCCCI for providing the appropriate assistance in the put up of the additional classrooms in their schools which will help in providing additional classrooms to cater to the increasing population of pupils enrolled in the said schools.

Ng pointed out that the federation and the local chapters of the organization of Filipino-Chinese businessmen in the country remain committed to extend whatever assistance is needed by the different public schools in different parts of the archipelago to provide additional facilities that will contribute in the overall efforts of the government, particularly the education department, to address the congestion of public schools.

The Operation Barrio School program has been an institutionalized project of the FFCCCI considering that the group adheres to the importance of providing the youth with quality education that will help them in achieving their dreams and aspirations of becoming successful individuals in the future who will be instrumental in helping uplift the living condition of their families.

The program is a continuing endeavour of the FFCCCI until such time that there will be no public schools that will be in need of additional classrooms to help decongest overcrowded classes for pupils to be able to conveniently learn their lessons and maximize their potentials in their classes.