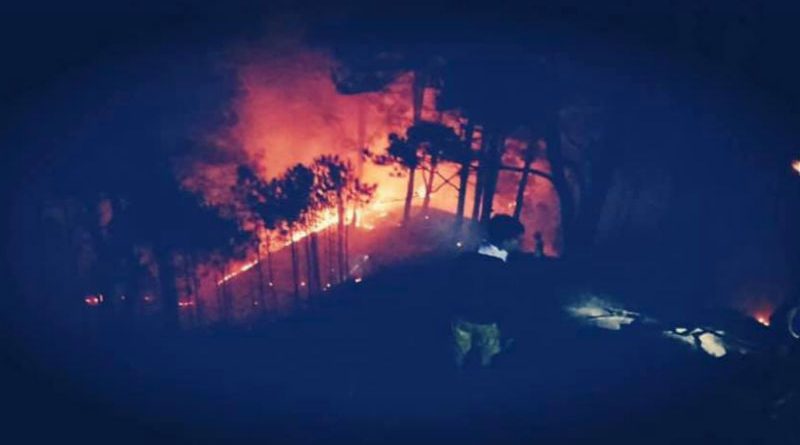 ITOGON, Benguet – Five people risked their valuable lives just to make sure that a forest fire will not inflict serious damage to public and private properties at Banauel, Ampucao, Wednesday afternoon.

Witnesses informed arson investigators that the forest fire broke out at around 7:30 Wednesday morning in a plantation site outside the mine working area of Philex Mining Corporation, the country’s largest gold and copper producer.

Philex firefighters were immediately dispatched to put the fire out, but they were not able to control the fire’s rapid forward spread due to the windy condition.

Philex employees, residents of the Padcal community, service providers, as well as teachers and students of the Saint Louis High School pitched in to assist in firefighting efforts, but the sheer magnitude of the blaze could not be suppressed as it continued to threaten the populated area and even some properties of the mining company.

Firefighters from the municipalities of Tuba and Itogon, from Baguio City, the Philippine Military Academy (PMA), the Philippine Export Zone Authority (PEZA), and from Delta Earthmoving, Incorporated also arrived in the area to help in controlling the fire from spreading and ravaging a huge portion of the forested area in the locality.

By around 3:00 in the afternoon, the charred remains of the four forestry workers, namely, Dante Molina, forestry supervisor, Nel Degyem, Marlon Guiniguin and Dexter Labasan, all contractual employees, were discovered about fifty meters below the Forestry-Nursery which was also ravaged by fire. The charred remains of the fifth casualty, Leon Mucate,  a retired company employee, was found some minutes later around forty meters from where the forestry workers were discovered by firefighters and emergency responders.

“We condole with the family members and relatives of the fire victims. We salute the heroic acts of the victims in trying to control the fire from ravaging vital installations in the area considering the fact that they even sacrificed their very own lives just to abate greater damage that will be inflicted by the fire to our properties,” Philex president and chief executive officer Engr. Eulalio B. Austin, Jr. stressed.

Austin underscored the cooperation of the whole Padcal community the employees, students, residents including friends from Baguio and host communities, made the big difference in suppressing the forest fire and prevented it from creating further damage to the schools and residences.”

The Philex official expressed his gratitude to all those who worked together in suppressing the spread of the fire because their efforts were instrumental in sparing more lives from being lost and more properties from being torched into ashes.

Philex has been recognized by the Philippine Mine Safety and Environment Association (PMSEA) for being one of the mining companies in the country with exemplary environmental preservation and protection programs having been adjudged as the company with the best mining forest for a number of years now.

He claimed that the offense of forest fires during the dry season is one of the problems being encountered by the mining company that greatly affects the implementation of its environmental preservation and protection programs.

By HENT
Photo by: BFP-CAR, uplifted from PIA-CAR facebook page.