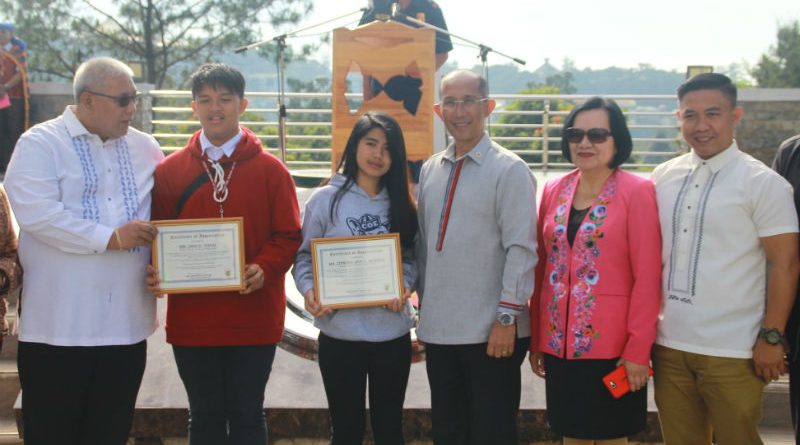 BAGUIO CITY  – The value of honesty continues to thrive among most Baguio residents, especially students who want to be emulated as models.

The city government recognized two young students of the Baguio City National High School (BCNHS) for their honesty by turning over to the personnel of the Baguio City Police Office–Tourist Police Unit (BCPO-TPO) based in Burnham Park  a huge cash which they found at the premises of the Baguio Athletic Bowl.

Mayor Benjamin B. Magalong personally handed over the separate certificates of appreciation issued by the city government to Jake D. Naval and Zirene Ann C. Boteng in recognition of their good deeds and honesty.

The honest students were recognized by the city government during the regular Monday flag raising ceremony that was held at the city hall grounds.

The city government expressed its gratitude to the honest students for their profound honesty in turning over to the police authorities the cash amounting to P47,880 which they found left in the Baguio Athletic Bowl grounds on October 31, 2019.

“This deed of honesty bares witness to their integrity that uphold the reputation not only of their families but the school they represent and the society as a whole,” the certification of appreciation issued to the honest students stated.

The city government institutionalized the giving of appreciation and recognition to honest residents for their good deeds in returning to the rightful owners the cash or other valuables they have found in the public places, establishments, comfort rooms or from public utility vehicles left by people for whatever reason.

Numerous individuals had been recipients of certificates of appreciation or recognition and resolutions of commendation from the city government for their good deeds and act of honesty considering that the presence of honest individuals provides a good impression for the city’s existing identity as a Character City, thus, the need for private and public institutions to continue espousing the value of honesty to the people for them to wilfully turnover to the rightful owner cash or valuable items which they may have found left in various places around the city.

Aside from peace-loving people, city residents are known to be resilient, perseverant and most of all honest that is why one of the city’s natural pull in enticing people from other parts of the world to visit the city is the existence of honest and trusted individuals who are always willing to extend the needed helping hand to others who are in need of appropriate assistance.

The city government urged rightful owners of cash or valuable items that have been returned to them by honest residents to provide the needed information to the concerned offices so the good deed and honesty of those who performed the commendable act will be given due appreciation and recognition in the simplest possible way just to show that the city values the good character and good deeds of its people.

By Dexter A. See
PIO-Baguio Photo

This post has already been read 273 times!MANKAYAN, Benguet– Lepanto Consolidated Mining Company (LCMC) rolled out a series of information